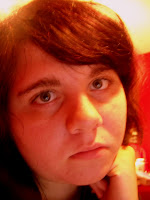 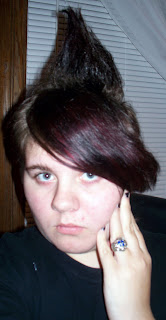 There's nothing to do but get a new 'do', of course! And that's exactly what Amanda did this past Saturday - got her hair cut Mohawk-style.

At first, I was pretty resistant to the whole idea as I just couldn't envision the hairstyle Amanda was trying to describe. To me, a Mohawk is completely shaved on the sides with a just a strip of hair in the middle that sticks straight up (hey, I've seen "Last of the Mohicans"!) but apparently that's not exactly the case anymore. As the stylist clipped and cut and shaped Amanda's massive mane of hair, I could finally see what she was talking about and had to grudgingly admit that it wasn't bad at all. In fact, it was kind of a good look for her. 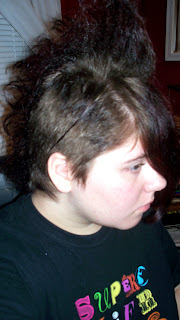 It's short on the sides, still long over the left side of her face, and has a longer section that goes from the top of her head down the back which can be teased and sculpted with a ton of hair products to form the Mohawk part of the cut. To me it kind of looks like a spiked pony's mane or something but Amanda is quite happy with it and has gotten lots of compliments from the kids at school.

Oh, and she's promised me no more funky colors if you can believe that! Right now her hair is sort of black with a little bit of last summer's pink still showing through in places and then her normal color on the sides. Eventually she'd like to go all black again but for now, I rather like the different colors and highlights. 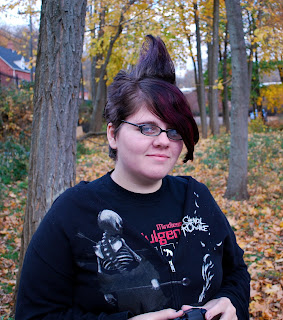 Next up for a new look - an eye doctor's appointment next Thursday with the challenge of picking out a new set of specs! She's had this pair for two years so it's time for a change of probably both lenses and frames. This could be interesting ...

Oh, speaking of interesting, I've had to turn comment moderation on for a little while but hopefully it won't have to be for too long and not to worry, there's still no dreaded word verification to slow you down from leaving a comment!
Posted by Linda at 11/14/2008