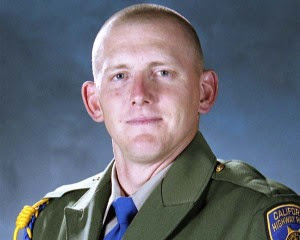 A Southern California Highway Patrol Officer was killed in the line of duty in the early morning hours on Monday, December 15th. Officer Joseph Sanders, 29, died when he was struck by a motor vehicle while attending to another traffic accident on the Pomona Freeway in Hacienda Heights.

The incident occurred at approximately 4:20 a.m. on a rain-soaked highway when two vehicles collided and one of them hit Officer Sanders as he set flares to direct traffic around an unrelated accident. Officer Sanders was taken to County-USC Medical Center, where he was pronounced dead at 5:25 a.m.

Gov. Arnold Schwarzenegger's office announced Monday that flags will be flown at half-staff at the Capitol. "Maria and I were deeply saddened to learn of the passing of Officer Joseph Sanders, who dedicated his life to ensuring public safety," Schwarzenegger said in a written statement. "California is a better place because of his service and his sacrifice will not be forgotten. On behalf of all Californians, we send our thoughts and prayers to Joseph's family, friends and fellow officers."

"These losses are tragic and we feel them deeply," said Capt. Dan Minor, who heads the Santa Fe Springs CHP office. "The members of my squad are very distraught. They lost a brother officer this morning."

Officer Sanders, a Marine Corps vet who had fought in Fallujah, Iraq, was a 14-month veteran of the California Highway Patrol serving out of the Santa Fe Springs Office. He is survived by his wife and three sons, ages 7, 3 and 10 months. His wife is pregnant with their fourth child.