How does Sunday manage to get here so fast and why am I never prepared? Oh yeah ... now I remember ... because I work too much! Oh well, in these times of economic recession and financial insecurity, it's nice to know that I'm doing my part to inflate Uncle Sam's coffers with the taxes I pay on all that overtime, right? Sigh ... meanwhile ... back at the blog ... 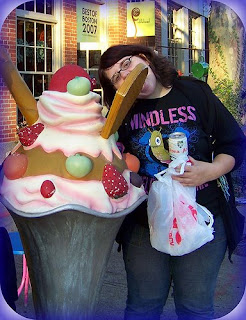 Monday's postm Caption That Photo!, once again gave my readers the chance to show off their funnier sides and you didn't disappoint me with some great captions for the photo at the right. As promised, I let Amanda pick out the winning caption and, what a surprise, she went with these two from a California gal with a great sense of humor ...

And, of course, I have to give a shout-out for my favorite

Thank you to everyone for playing along, I get a real kick out of reading your creative and funny comments and as soon as I can find a good picture, we'll play again!

On Tuesday I wrote two posts; the first was a short one about my Christmas Cash Crisis - Again! in which I lamented the fact that I am apparently not smart enough to put money away in a Christmas club and end up being short, once again, at the most commercialized wonderful time of the year. Leave it to my friend from Texas to be a smart aleck ...

MightyMom said ... get busy and make your kids and grandkids something special! you know, with all that FREE TIME you have!!!

Thanks, Sarah, I'll get right on that! NOT!

My second post of the day, The Legend of Chief Uncas and Indian Leap, told the story of the legendary Mohegan Sachem Uncas who faced down a mightier force of Narragansetts and made a leap across the Yantic River that went down in history. I tried to make the tale as accurate as possible but I'm not positive that it is due to the conflicting stories I found during the research of the post. Still, it's a great story that gives readers a glimpse into the history of Norwich. One of the local boys thought I done good ...

Erik said ... Awesome, awesome post Linda!! You know I'm a history lover just like you, and this was a great post. Kinda wish CPTV, PBS, or someone would make a movie or documentary about this. Granted someone made "The Last of the Mohegans" with Daniel Day Lewis, but it wasn't the same story... Still a good movie though!

I'm with you, Boukie, I wish someone would dig more into this and do a documentary - I'd watch it! I'm glad you liked my version!

On Wednesday I continued to take a look at the area around Indian Leap with Yantic Falls in Pictures & Music in which I took a good number of my pictures and set them to Native American drumming music. Obviously I take way too many pictures but slideshows set to music are a great way to display them! The post inspired the following comment and question ...

Jeni said ... Loved the video and music -quite some awesome sights, Linda. BTW -don't remember if you mentioned this in your earlier post -just wondering here -what is the distance across the river at the area of the Indian Leap anyway? Seems so incredible that anyone would attempt to hurl themselves across a gap like that, doesn't it?

Good question, Jeni, and I had meant to mention that somewhere along the line but forgot ... at the time of Uncas' leap across the gorge, the gap was around 50 feet or so however due to time and erosion it's obviously much, much larger of a gap now and you'd have to have wings on your feet to get from one side to the other - or a rocket-pack! Were anyone to actually try it and make it, it would be a whole new legend!

With my camera still firmly in hand, Thursday's post showed you Norwich's City Hall Lit Up for Christmas. The pictures were part of my first attempt at night photography with my Nikon and even though it was kind of cold and I didn't know what I was doing for the most part, I thought I got some fairly decent shots. A couple other people thought so, too ...

Lois Grebowski said ... Wow! That is one beautiful building all lit up! And your shots were uber-fantastic! You go gurl!!!! :-D)

PEA said ... My first thought was that it looks exactly like one of those Christmas houses you can buy to make a village...how beautiful it is!! I wish we had a City Hall that looked like that. Wow! I just love the way they've decorated it...I would just sit there for hours admiring every little detail! lol xoxo

Aw shucks, thank you, Lois, and PEA, you're right - it's very picturesque and Christmasy looking. I'll have to see if I can get some shots with some snow if we get some like they keep threatening!

On Friday I did two posts again ... the first one was I've Got a Question - You've Got an Answer where I asked the question : When it comes to a Christmas tree, do you have an artificial tree or a real one?

The answers seemed to be almost unanimously in favor of an artificial tree for many of the same reasons that I had eventually switched over to one myself ...

carol g said ... Growing up it was the real McCoy. However, waaaaaaaaaay back then, the phrase 'artificial tree' was just a twinkle in someone's eye. Now we have a full-size (7 foot) artificial tree that came with the lights already strung on it... how I HATED to string the lights on the tree every year!!

silverneurotic said ... artificial. when I was growing up, my family would go every single year to buy a real Christmas tree...but it just got to the point where all my younger siblings just became "too old" to enjoy the process of searching for the "best" tree and my parents decided to go for an artificial. It cuts down on the mess as well so that's a plus.

Some, though, have a more sentimental reason for their Christmas trees ...

Bud Weiser, WTIT said ... I have a small tree like yours, that my daughter Jules gave me after my last divorce (10 years ago) She bought lights with it. And for the next few years she bought ornaments and a skirt, etc. She is still very sick and off in California. I don't hear much from her as I do with my other three. I always smile think of the happy (and well) 13 year-old who gave me a perfect lil' tree a decade ago...

I bet that tree brings back so many happy heartfelt memories for you, Bud. Thank you sharing that with us.

My other post for Friday is the beginning of a new meme that CrAzY Working Mom is working on being that she's no longer welcome at Sky Watch Friday (they have a policy against paid posts and Tisha, like myself, does them from time to time to help supplement our incomes a little bit). Looking Up at the Sky on Friday might just catch on like wildfire but in a way I kind of hope not because I prefer the smaller memes where I can visit everyone else. For this week I posted a collage of three pictures of the sunset that I took earlier in the week from my bedroom window ...

haleyhughes said ... You captured some gorgeous color in these shots. Very nice. And just because you're not an official part of the meme, doesn't mean you can't be watching the skies on Fridays. :)

Thank you, Haley, and I do tend to watch the sky no matter what day of the week it is as it can just be so gorgeous when we remember to look up rather than down. Tisha, good luck with this and I'll see what I can come up with for this Friday!

Finally, on Saturday, I was tagged by Mimi, Queen of Memes for The Countdown Meme and even though I didn't mean for it be a poignant post, it appears that it ended up that way. Me and my darned sentimentality! I received some very lovely comments on this post and one in particular from my friend Bulldog who is a heck of a guy even though he likened me to a battleship! I don't think he meant that I was large, gray, and hard as steel, though! It's a long comment and it brought tears to my eyes - happy ones! ...

bulldog said ... Very nice blog post! I actually learned a few things about you I didn't know already! Wow! That meme seemed like so much fun, I just might answer these questions, then e-mail you!

As for the man you care about - God, I wish I could make your most heartfelt wish come true. It literally brings a tear to my eye to see someone in this "place", and do you know how hard it is to make a bulldog-biker cry??? Just remember, you have the biggest support network of anyone I know, because whether you realize it or not, you are LOVED, dammit! So many folks in cyberspace & in REAL life gravitate to you like proverbial moths to a flame - why? Because you emit warmth, sincerity, and the capacity to love that would fill a fleet of tri-axle dump trucks!

Know what I like about you? You resemble a battleship! Yep, a battleship! Why? Hard as steel on the outside, all armor-plated with bristling guns, ect...but on the INSIDE (where it is thought to count), you have life teeming within: camaraderie, cohesiveness, intelligence, and direction! You have a purpose, Linda, and not to be the "dishrag" you sometimes think you are! A real purpose in life.

Well, that's enough rambling from a bulldog-biker & former Navy ROTC cadet who likes to see his words on screen. Just thought you should know - your presence enriches my life & the lives of everyone you know. BTW: I may not be Seth or JM, but I'm gonna smile @ you every chance I get! ;-

Thank you so much, Bucky - you really made my day with this but now I just hope that no one takes to calling me the S.S. Linda as a result!

As if the sentiments there didn't blow me away, my good friend the Princess Patti left her own wonderful comment ...

Patti said ... That bulldog is a cool cat. Your presence in the blogosphere and in real life enriches my life as well!

Were you guys trying to make me cry on Saturday?!? If so, you succeeded! Thank you all so much for your support and encouragement and letting me be a part of your lives just as you are so much a part of mine.

Now, everyone go out and have a great week - leave me a comment or two if you feel so inspired and perhaps you'll find yourself right here next Sunday!
Posted by Linda at 12/07/2008