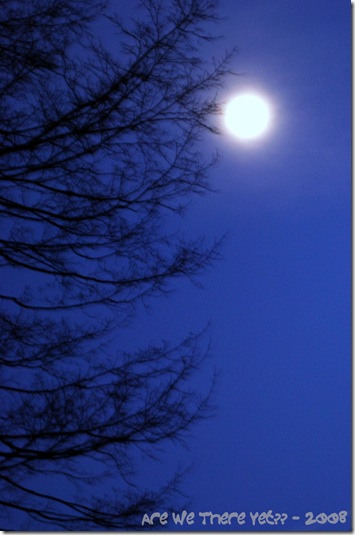 This past Friday a lot of people got to see the biggest full moon that was going to appear in the sky until 2018 ... I didn't. Well, I mean, I did but not until I got out of work at 11:00 and by that time it was so high in the sky that trying to take a picture of it would have been totally futile unless I had some amazingly huge telephoto lens ... which I don't.

I hear it was quite the sight to see and I'm really sorry that I missed it though I've seen some very nice pictures on other people's blogs who were not only fortunate enough to see the moon but also to take some pictures of it.

Moon photography - as I'm learning - is really quite tricky, though and even if I had been able to try to capture some pictures, I have a sneaky feeling that they wouldn't have come out right. Or at least not as "right" as I would have liked them to.

The picture that I've chosen for Roger's Creative Photography Meme this week is one that I took on Sunday morning whilst on my way into work. It was about 6:30 in the morning but the moon was still very bright in the sky and I decided to at least try to take a quick picture of it from the driver's seat of the car (I was pulled over at the time!).

The tree branches aren't exactly what you would call sharp but I kind of like the fuzzy look, it makes it look more three-dimensional to me - well, either that or my aging eyes just make everything look that way!

Don't forget to check out the Creative Photography blog if you'd like to see some more great pictures or if you've got one you'd like to enter yourself!