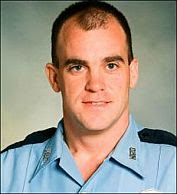 An 11-year veteran of the Houston Police Department was shot and killed during a foot pursuit on Sunday, December 7th. Police Officer Timothy Abernethy had initiated a routine traffic stop at approximately 8:30 a.m. on a suspect that turned out to be a prison parolee who is considered to be a 'career criminal'. The suspect jumped from the car and ran through an apartment complex in northwest Houston with Officer Abernethy in pursuit.

According to prosecutors, the suspect shot Officer Abernethy three times as he rounded a corner knocking him to the ground before walking over and shooting him in the head at point-blank range; following that he calming walked to his SUV and drove away.Officer Abernethy was transported to Memorial Hermann Hospital where he succumbed to his wounds. The suspect in the shooting was arrested at a northwest Harris County home and has confessed to the killing though he gave no explanation.

"Too many times I've had to go and advise a family and members of an organization of an officer's death." Police Chief Harold Hurtt said. "Believe me; it does not get any easier."

"I tell you, everybody's pretty devastated," said Gary Blankinship, president of the Houston Police Officers' Union. "This guy is probably one of the most honest and conscientious people I've ever known. He was just beyond reproach."

Officer Abernethy - who had served on the Houston Police Dive Team and Bike Patrol - was preparing to become a member of the Bomb Squad when his life was cut short while working an extra shift to help combat the high crime rate in the area where the traffic stop was made.

The 43-year old Navy veteran is survived by his wife, Stephanie, and two adult children including a son who is currently serving in the Navy.

In Tennessee, a Sumner County Sheriff's deputy was killed in a car accident early on Monday morning, December 8th. Deputy Sheriff Brian Denning, a member of the 18th Judicial District Drug Task Force, was returning to the office following a call at approximately 12:51 a.m. when his patrol car left the roadway, struck a tree, and caught on fire trapping him inside.

Passing motorists attempted to assist Deputy Denning but couldn't get him out of the vehicle, according to Sheriff Bob Barker. "He was a fine deputy as well as a person," Barker said. "He was very enthusiastic about his career. He did a great job everyday."

A 12-year veteran of the department, Deputy Denning was well liked amongst his colleagues and the community. He began his career in April 1995 as a corrections officer and most recently served with the task force's interdiction team - which polices drug trafficking - and as a K-9 officer.

Deputy Denning, 36, is survived by his wife, Barbara Jean, and two stepchildren, Jessica and Whitney. 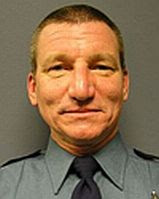 In one of the worst law enforcement tragedies in Oregon history, Senior Trooper William Hakim of the Oregon State Police and Captain Tom Tennant of the Woodburn Police Department, both 51, were killed in a bomb blast on Friday evening, December 12th, at the West Coast Bank in Woodburn, 30 miles south of Portland.

The incident began earlier in the day when a bomb threat was made to the Wells Fargo Bank next door to the West Coast Bank. The bank was evacuated at approximately 10:30 a.m. and police found a suspicious object that was determined not to be dangerous. At that time, West Coast asked police to check its bank but police found nothing. Later that afternoon, a bank employee found a suspicious object under a bush and called police again who evacuated the bank at 5:00 p.m. 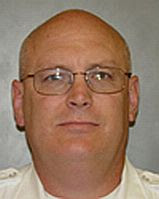 At some point after officers responded to the scene, the suspicious object was moved inside the bank where police scanned the item with a portable x-ray machine and at 5:24 p.m., upon completion of the scan, the object blew up fatally injuring both Trooper Hakim and Captain Tennant. Woodburn Police Chief Scott Russell was also injured in the blast and remains in stable but critical condition at a Portland Hospital while a female bank employee was treated and released from Salem Hospital.

Police said they currently have no suspects and didn't know the motive. Close to 75 investigators from local, state, and two federal agencies are investigating the incident coordinated by the Marion County Sheriff's Office.

Oregon State Police said that Trooper Hakim, an 11-year veteran of the force, was the 28th trooper to die in the line of duty, and the second detective in the Arson and Explosives Section. A dedicated family man, he is survived by a wife, a 16-year old son and 18-year old daughter.

Captain Tennant, a 28-year veteran of the Woodburn Police Department, was described by Woodburn Police Sergeant Jason Tiusty as an active member of the community "who would do anything to help those in need." He is survived by his wife and three children ages 23, 22, and 17.
Posted by Linda at 12/14/2008