Due to my whacked-out work schedule lately, I haven't had a chance to participate in Morgen's Manic Monday Meme but with things being semi-back to 'normal' I thought I would join back in with this week's theme of "light". How lucky for me that I actually had some pictures dealing with light that I took last week when I was out freezing my fingers off in an attempt to take some night photos. I knew they'd come in handy at some point!

This first picture is of the Park Congregational Church which sits on the corner of Broadway and Crescent Street right across from Norwich Free Academy where Amanda attends high school. It's a very pretty church which was established in 1784 and, if you've been a regular reader for awhile, you might remember this church from my Steeplechasing in Norwich, Part III post (which was inspired by Princess Patti's steeplechasing escapades in her part of Connecticut!) 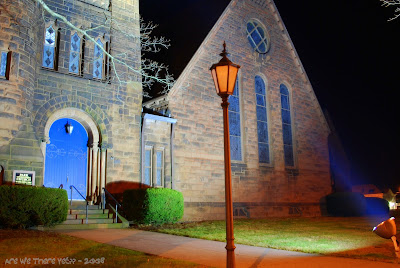 Even though there's nothing particularly spectacular about this shot, I figured it fit the theme of "light" as not only is there a lovely light post in the middle of the picture but there's that lovely beam of light emitting from the floodlight to the right. Oh, and just for the record, I love the blue door on this church!

The lights really do look a lot prettier in real life than they do in this picture but at least it gives you a bit of a glimpse as to what downtown Norwich looks like around Christmas.

As I've said, I'm still experimenting and learning when it comes to night shots with the Nikon but I'm hoping that once I learn the nuances of light and exposure and all that good stuff a little bit better then I'll have some better pictures to show you. In the meantime, Travis said he didn't mind if I experimented on you folks!

Be sure to see who else lit things up over at the Manic Monday Meme and have a wonderful Monday no matter where you are or what you're doing!
Posted by Linda at 12/08/2008