Why is that if I take one single Tylenol PM tablet I can't seem to get out of my own way the next day? I thought the stuff was supposed to help you wake up refreshed, not feeling like you just stumbled out of an opium den. Not that I'd know what stumbling out of an opium den was like, mind you!

While picking Jamie up at my son's house in Bradford, Rhode Island yesterday I stopped to take some pictures at a small pond across the street from where he lives because there was just something about the two ropes that are there for summer fun just hanging forlornly in the cold that appealed to me ... 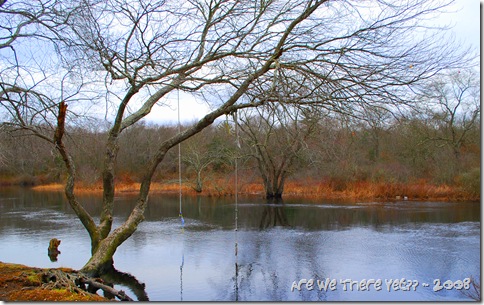 I took Jamie to see Twilight at the movies last night and liked it a little bit better the second time around as I tried not to view it with such a critical eye as when I went the first time. I still thought that Jasper looked like Edward Scissorhand's cousin or something and that Bella needed to have a stick surgically removed from her nether regions but other than that, it was okay and in certain scenes Edward looked quite hot for an ice cold undead guy!

I was quite surprised by the number of women my age at the theater who didn't seem to have a teenage girl along with them and also with the amount of guys that were there. The first time I saw the movie, I think there was maybe one guy in the theater and no doubt he had been dragged there kicking and screaming!

My good friend MizCyn reminded me that her husband is quite the railroad aficionado in a comment on my latest Creative Photography Meme entry so I promised her another picture for him. I thought perhaps he might like this one even though it's just a railroad bridge ... 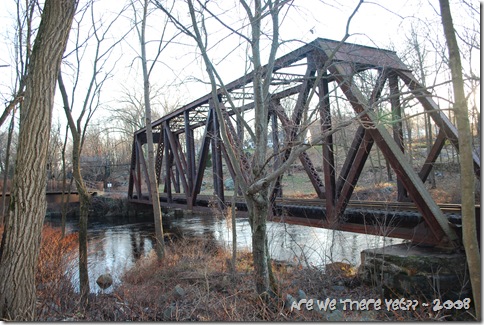 My son got me a digital picture frame for Christmas that I'm really looking forward to using once I figure it out. It's got an 11-inch viewing area so even my old eyes should be able to see it quite well from across the room plus it takes MP3 music downloads. How cool is that?

All of the snow that we got a week and a half ago has melted because of the unseasonably warm temperatures we were having but it looks like more is on its way and right on time for me to have to try to drive to work in it on Wednesday morning. Figures!

I know that winter hasn't even officially been here for ten days yet but I am ready to bid it a fond farewell. There are days when I feel like I am never going to be warm again and can fully understand why so many people flock to Florida, a state I've never been all that enchanted with (an apology to all those who live there and love it).

Just for hee-yuks I looked at the Norwegian Cruise Line website the other day and saw the perfect cruise for next Christmas-time. It leaves out of New York City on the 26th of December, visits warm locales for 5 days, and then returns to New York on the 2nd of January. Unfortunately the price itself isn't perfect on a single-parent income but should I win that elusive Powerball sometime between now and then I can tell you exactly where I'll be next New Year's Eve! At least it doesn't cost anything to dream, right?

Jamie and I are going to do some after-Christmas shopping today with my mom. Even though I'm not keen on shopping my mom likes to go and supposedly there are bargains to be had out there. Plus Jamie still has a little Christmas cash burning a hole in her pocket!

Lastly, just one more picture of the pond in Rhode Island before I go just because I like it! ... 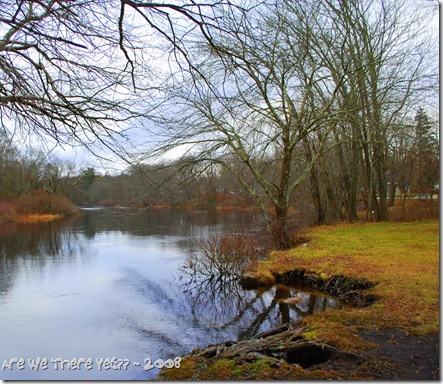 Email ThisBlogThis!Share to TwitterShare to FacebookShare to Pinterest
Labels: random