Acknowledging Awards While Breaking the Rules! 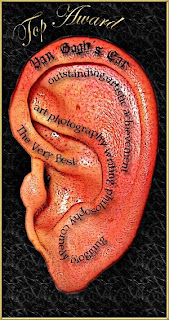 Let me just start this post out by stating that I have never ever been given an ear before ... ever! Recently, though, I was awarded the very unique Van Gogh's Ear Award from the equally unique Roger of Idaho Daily Photo and the award comes in the form of an ear - naturally!

Roger developed this award as a way to recognize people who make a difference in the blogosphere. In Roger's own words:

You may know the story of Vincent Van Gogh, a well-known artist in history. Although a brilliant painter, in his later years went quite insane and he received the nickname of fou roux ("the redheaded madman"). The most bazaar of Vincent's behavior is when he cut off the lower part of his own left ear lobe, which he wrapped in newspaper, and gave to a prostitute named Rachel in the local brothel asking her to "keep this object carefully. After this he suffered recurrent bouts of mental illness, which led to his suicide July 29, 1890 he was 37 years old. His works of art are priceless.

The point of this award

We are all artist in are own way be it art, photography, writing, philosophy, comedy, blogging and we all go a little crazy sometimes. But if you ever feel so crazy to cut off your ear and give it to a prostitute "Seek Help"!

Roger then went on to pass out his ears to a uinque group of bloggers, including myself, and you can now see them popping up all over the place. I can assure you there is nothing else like it out there and I am honored that Roger bestowed one upon me. Thank you, Roger, and thank you for your very own uniqueness! 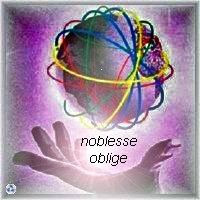 Roger wasn't the only one passing awards on to me as I also received the Noblisse Oblige Award From Ohio With Love by the lovely Ivana. This very nice award comes along with a rather lengthy list of rules and must-do's:

1. The Blogger manifests exemplary attitude, respecting the nuances that pervades amongst different cultures and beliefs.
2. The Blog contents inspire; strives to encourage and offers solutions.
3. There is a clear purpose at the Blog; one that fosters a better understanding on Social, Political, Economic, the Arts, Culture and Sciences and Beliefs.
4. The Blog is refreshing and creative.
5. The Blogger promotes friendship and positive thinking.

The Blogger who receives this award will need to perform the following steps:
1. Create a Post with a mention and link to the person who presented the Noblesse Oblige Award.
2. The Award Conditions must be displayed at the Post.
3. Write a short article about what the Blog has thus far achieved – preferably citing one or older Post to support.
4. The Blogger must present the Noblesse Oblige Award in concurrence with the Award conditions.
5. The Blogger must display the Award at any location at the Blog.

In this case I'm going to take a page from Sandee at Comedy Plus and be a rebel and ignore the rules of this particular award while saying a very nice thank you to Ivana for thinking of me while she was passing it out. What can I say? Every once in awhile I need to be a rebel - with or without a cause!

Thanks again to Roger and Ivana for thinking of me and my lil' ole blog!
Posted by Linda at 1/09/2009