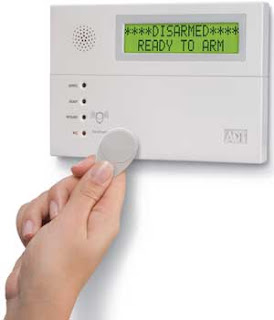 It seems that whenever a nation (such as ours) is going through tough economic times, you start to notice that certain things become more prevalent such as an increase in robberies whether it be a bank or store, an increase in homelessness, and even an increase in home invasions and break-ins. As it has been said in the past, "desperate times call for desperate measures" while people feel driven to make a choice between breaking the law and going to jail or trying to feed their families. That's not to say that everyone who robs a bank or store is trying to feed their family, some have other "addictions" they need to feed but I think you get the gist of what I'm trying to say.

At any rate, during times like this it's probably a good idea to think about perhaps investing in a home security system. I don't have one myself, and probably never will, but that's because I live in an area where home burglaries are not very common at all. That doesn't mean that they don't happen, though, and maybe I'm just being a little too trusting but I've always figured that if anyone broke into my house the only thing they were going to get was disappointed as I really don't own much of value that could be pawned (otherwise I'd probably be pawning it myself in order to keep myself afloat!).

It's too bad that people have to barricade themselves in their own homes behind security systems but reality is what it is and I have a feeling that regardless of who is being sworn into the Office of the President next week, change is going to be a long time in coming and those desperate times and desperate measures will continue. It's probably not a bad idea to protect yourself and those things you hold dear in the meantime.
Posted by Linda at 1/17/2009