Friday at the Falls

As I mentioned in last night's post, Jamie and I took some time out of our pretty boring day Friday afternoon to head over to the falls of the Yantic River and hike around a bit and take some pictures. Normally I'm not real keen on tromping around out in the cold and snow but I thought it might be a good chance to go take some pictures of the falls in winter as well as the area surrounding them. No doubt I'll be back out there again before the winter is through as the falls are just as beautiful frozen as they are in the summer. 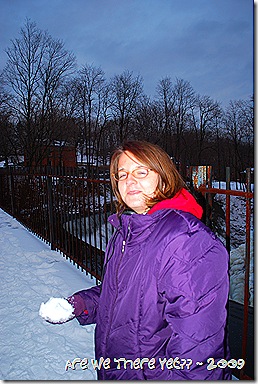 It wasn't as cold as I thought it would be but that's probably because the nasty winds that we've been having lately had finally blown themselves out and there was nary a breeze. Well, either that or the four layers of clothing I had on was sufficient! Jamie was colder than I was but that's probably got something to do with that thin Florida blood of hers. Ironic that she was the only one of my three kids that was actually born in Connecticut (the other two were born in Southern California) and she's the one that gets the coldest!

She really was a good sport about it, though, and seemed to enjoy our time walking around on the railroad bridge and tracks as we made our way between the upper and lower falls. I wish the light had been a bit better but considering it was after 4:00 and cloudy to boot I guess I'm lucky there was any light at all. I guess I should have gotten inspired to leave the house earlier than we did but whatchagonnado??

While we were walking back across the footbridge that spans the river next to the railroad trestle we met up with a couple of guys who were taking their three dogs out for a little exercise. We ended up chatting with them for a bit about how beautiful the area was and how few people probably even now that this part of Norwich exists. One of the guys said that he comes out to the falls every single day and never ever gets tired of the view. I don't blame him, if I lived in the area I'm sure I'd be out doing the same thing! 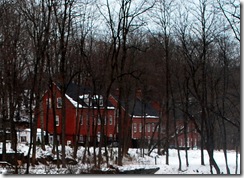 As a matter of fact, one of the old historic townhomes across from the falls has been for rent for awhile now and if I thought I could swing the increase in rent, I'd be calling the guy who has the listing in a New York minute. If you look closely, the one for rent is the third one down in this row and I'd love, love, love to live there. Maybe I should give the guy a call ...

Anyhow ... I put together a video with the pictures I took while on our walk today and put them to music with a song that Amanda really likes. Don't panic! It's a very calm song actually and I think you might end up liking it, too! The only thing I don't like about putting the pictures in video format is that I lose a little bit of the quality but it still gives you a good look at the winter scenes that we saw. At least I hope so!


Everyone have a great Saturday and I'll see what Jamie and I can get up to today that might make for a good post tomorrow. After all, she goes back to Florida on Monday so we have to take advantage of the time we have together while she's here. Who knows? Maybe another snowy walk will be in order but I bet she wears warmer socks this time!
Posted by Linda at 1/03/2009