The Kindness of Strangers

I love how just about the time you're starting to lose faith in the fact that common courtesy and small niceties have gone the way of the dinosaur, life will serve up something that makes you take pause and think "well, maybe not entirely". I had such an incident happen the other day.

As I knew they would, the glasses that I had ordered from Zeni Optical for Jamie's Christmas present showed up Monday - after we had to leave to go to the airport! Normally the mailman is here long before we would have had to leave but due to what I'm sure was a combination of Murphy's Laws and the Laws of the Universe, that was not the case on this particular day. Somehow I knew that when I got home they'd be here and - sure enough - they were. Ah well, no big deal, I'd just hie myself down to the local post office and send them on their merry way to Florida and Jamie's eyes.

Of course, hieing myself to the post office is not the easiest task in the world here in Norwich as our post office - which is in a grand old building - is in an area of downtown where parking is difficult at best and non-existent at worst. Consequently as much as I appreciate the architecture of the building, I try to avoid it whenever possible and instead will head over to the post office in Montville which is a bit further but infinitely easier to get to. 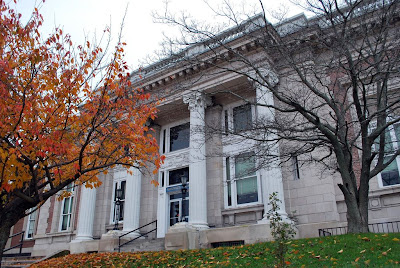 Knowing that Amanda was going to need a ride home from school (she stays for a club meeting on Tuesdays), I decided that the best time to go to the post office would be just before having to go get her even though the post office in Montville is in the complete opposite direction of Norwich Free Academy. Still, it was better than trying to find a parking place in downtown Norwich and I had plenty of time. Or so I thought ...

Arriving at the post office I found that there was one person ahead of me in line so I figured I'd be done fairly quick and could be on my merry way which was good as Amanda had sent me a text message and told me that her meeting was going to be over a lot sooner than originally thought. Not to worry, though, I'd get Jamie's package mailed and still have plenty of time to get back to Norwich to pick up Amanda. And then I saw that the one person in front of me had a passport application ... ut-oh.

The postal clerk appeared to be doing an extremely efficient job of looking over the application and after perusing it for several minutes she asked the seeker of the passport for her ID.

"Oh." With her purse on the floor by her feet, the applicant bent down and rummaged through until she found her driver's license. She'd obviously missed the part on the application that states you need to show proof of ID.

In the meantime, another gentleman had entered the post office and taken his spot in line behind me with several boxes in his hands to be mailed. I smiled at him, he smiled at me, and then we both watched the drama in front of us unfold as the clerk then asked the applicant to write out a check for the passport fee.

"Yes, ma'm, you need either a check or money order."

"Oh, I have a check card, will that work?" Obviously the applicant hadn't really read the application very closely as she'd missed that part, too.

"Oh dear, I left my checkbook at home but I live just around the corner, I can go get it."

As I was thinking "yes, yes, you can and then the rest of us can get our stuff done and out of here" the clerk offered the suggestion of using her check card to buy a money order. Groan ...

After more rummaging through her purse, which was still on the floor, the lady came up with her check card and passed it over to the clerk who ran it through and produced a money order which she then gave to the woman to finish filling out.

"Make it out to the State of Connecticut Passport Office and then fill in your name, address, and phone number."

I think I audibly groaned.

At this point I was getting a little antsy and starting to look at my watch thinking that Amanda was going to have to wait in the cold for a little bit as I was most definitely going to be late. Meanwhile another person joined the line and the postal clerk took that time to tell us all that it had been a busy day and it was just herself and one other clerk in the back working and they needed to still get the packages sorted and onto the truck and they were running late.

After looking at my watch for the umpteenth time I must have been looking a little frazzled as the gentleman behind me asked me if there was somewhere I needed to be. I told him that I had to go pick up my daughter from school but she was just going to have to wait a bit as I really needed to mail my package. He looked at the padded envelope I had in my hand and asked if that was the only thing I was mailing and I said that it was.

"How much do you think it will cost to mail it?", he asked me.

It didn't weigh hardly anything so I said I was sure it wasn't much and he then said, "Give it to me and I'll mail it for you so you can go get your daughter."

Was he kidding me? A total stranger was offering to mail out a package for me? The postal clerk standing behind the counter looked on as the lady who needed the passport was still filling out the money order. When I said thank you but he didn't have to do that the gentleman replied that he would be happy to do it for me and to give him the package and go get my daughter so that she wouldn't have to wait in the cold.

For just a split second I wondered if it was a smart move to hand something over to a complete and total stranger and trust that he'd mail it and not just keep it but I quickly decided to put my faith in a guy I'd never seen before and gave him the package. I told him thank you several times over and promised him that I would pay his act of kindness forward at my first opportunity. He smiled and said, "That sounds great."

As I was driving back to Norwich I couldn't help but think "wow" as that sort of thing just doesn't seem to happen very often and it was nice - no more than nice - to have been the benefactor of another one of the angels who walks among us. Sometimes it's too easy to forget that there are truly good people out there who aren't trying to gain anything by being nice to others and performing random acts of kindness; too easy to be suspicious of every person and every little thing; and too easy to think that people just don't care about each other anymore. It's nice to have my faith in human nature restored a little bit and I hope that when I pay forward the act of kindness this gentleman did for me, that it will restore someone else's faith a little bit, too.

Perhaps I have not always "relied upon the kindness of strangers" as Blanche DuBois did but it's very nice to be on the receiving end of such a thing every once in awhile. Thank you, kind sir, wherever you are.
Posted by Linda at 1/08/2009

Email ThisBlogThis!Share to TwitterShare to FacebookShare to Pinterest
Labels: acts of kindness, strangers