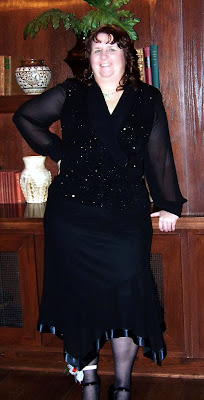 This is going to be a busy week what with starting to pack up and move things over to the new place (perhaps I'll need some Ephedrasil hardcore to keep me going!), hoping the predicted snow for this week doesn't mess up the big part of the move on Saturday, starting a photography class tomorrow night, and still trying to work but I wanted to post a couple quick pictures from this weekend's party as promised.

First, let me just say that I had a wonderful time and I want to thank American for putting on the party every year. It's so nice to see everyone all dressed up and away from work. In these days of economic downturn, I'm sure it would be a lot easier for the company to cancel the party but instead this year we had it at a very nice venue with food that was very tasty. Even though Dispatch & Scheduling inadvertently got skipped over again when it came time to rattle off statistics for the year, that faux pas was made up for by extra drink tickets given to us and a promise that it won't happen again next year. Thank you, Michael, and I guess we'll see about that come next January!

The Employee of the Year award was given to the person whom I thought would get it - Warren. The winner is a part-time EMT but he spends a lot of time up at the local minor league ballpark in Norwich every summer working at the home games. He's called "Mr. Baseball" by some and rightly so as he practically lives in the EMS room at Dodd Stadium from April to September! Warren has got one of the most positive attitudes ever and he's always smiling and happy. He's also a Building Inspector for the City of Norwich who came out to check my lack of hot water situation but that's just a side point!

For those who left comments and said they hoped that I would win the award - thank you but I won it back in 2004 and am pretty sure I will never get it again. Heck, I don't even win Employee of the Month anymore but I guess that's pretty much standard operating procedure. I don't think that I'm less of a good worker since getting the award, I think they just prefer to give it to others who haven't received it before. At any rate, I get to stand at the front of the room with the other former Employees of the Year as they name the new one and that's always a privilege and an honor (especially considering I get to stand next to Paul who has a great sarcastic sense of humor!). My award will always be extra special to me because I know that I won it based on the opinions of those people whom I dispatch - the road personnel - rather than the opinions of management and even though it would be nice to know that management thinks I'm doing a good job, it's more important to know that the backbone of the company thinks I do a good job. That's job satisfaction right there.

Anyhow, I did say quick photos, didn't I, and here I am babbling on and on when there are a ton of things to do around the house. After I get moved, perhaps I can do a better post with a better explanation of some of the pictures that are going around Facebook (thanks, Jen!) but in the meantime, here are some of the more "conservative ones" ... 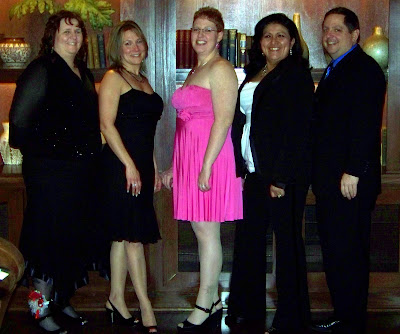 From left to right on this one - myself, Jennifer from scheduling, Jen my dispatch partner, Chica from scheduling, and Frank - part-time dispatcher for us and full-time Fire Inspector God at the Mohegan Tribal Fire Department! 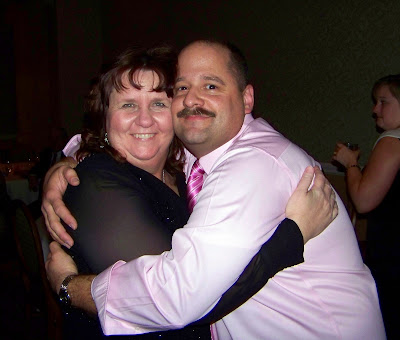 Myself and Andrew - my very favorite paramedic of all time and the guy I look forward to borrowing from his wife for one slow dance every year. Thanks again, Bethany! 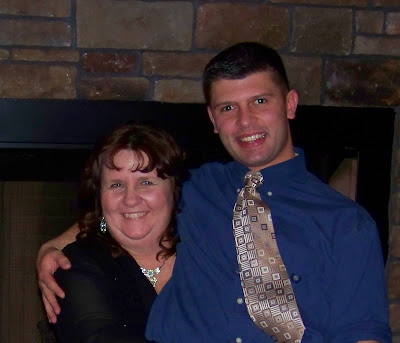 Myself and JM - the guy I took as my guest to the party so that he could catch up with all of his old buddies from work (JM left American this year to move to Hartford to start paramedic school).

Now, if you see any other pictures over on Facebook that look like more went on than it did with myself and JM, those were simply just fooling around for the camera and not my idea. I can assure you that nothing inappropriate happened and the drought still stands at six years plus and rising. Oh, and as for the "garter" - that's the corsage that I get as a former Employee of the Year and I chose to wear it as an anklet rather than a wristlet.

I'm probably going to be quite absent from the Blogosphere for the rest of this week as there is much to do in order to get nine years worth of accumulated stuff moved from Point A to Point B but I may pop in to post something on occasion. As for visiting everyone else, that's probably not going to happen and for that I apologize. If anything big happens to any of you, please email me and let me know as I will be able to respond to email and though I should be able to read posts while I'm at work through my Reader, I'm not going to be able to comment. I hope that makes sense!

Alright, I need to quit procrastinating and start packing - my days off this week are going to fly by!