Monday's trip to the airport with Jamie was an exercise in well ... exercise! Who'dathunk that Monday afternoon would be so busy for flying but it was! We got to Bradley Field with just a little under an hour to go before her flight was due to take off only to walk up to a Southwest Airlines counter with a line snaking almost out the door. Ut-oh! By the time we got through the slow-moving line and got Jamie's bags checked in, it was getting down to the wire and Jamie's flight had already started boarding.

Once we got through the TSA Security Checkpoint I had Jamie grab her boots out of the bin and we practically ran down the concourse to her gate where we arrived just as I heard her name overhead-paged along with one other passenger. Luckily there was a back-up of passengers waiting to get on-board which gave Jamie time to get her boots back on before joining the line. She wasn't the last passenger on, though, as the other lady they had paged walked up behind us (at a rather leisurely stroll it seemed!) as Jamie gave me a final hug good-bye. 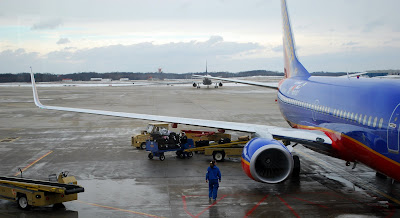 The clerk at the counter had told us that Jamie's bags might not make the flight as we were checking them in less than 30 minutes before flight-time but as I sat down and waited for her plane to take off I watched the luggage handlers loading up what looked to be A LOT of bags with the tell-tale less-than-30-minutes-till-boarding-time bright pink tags. I was pretty sure that her bag had made it but if not, they'd get to Tampa at some point in time.

Right on time her plane pushed back from the gate and I waited as my youngest started her latest trip down the tarmac to get into position for take-off. I don't know exactly what good it does me to stay at the airport until the plane is in the air but I feel like I should just in case they have to come back to the gate for some unknown reason. Plus it gives me time to get my own act back together before I make the lonely walk back to the car as I've yet to figure out how to keep a lump out of my throat while watching that plane take off.

After leaving an arm and a foot at the parking lot cashier to cover the exorbitant price of parking, I started back to Norwich but on a whim made a quick stop at the nearby tobacco sheds in Windsor that I always pass by when going to or from the airport. The tobacco sheds have been there for an extremely long time and I remember going past them years and years ago when out for Sunday rides with my grandfather. It was kind of bleak out but the weather sort of matched my mood! 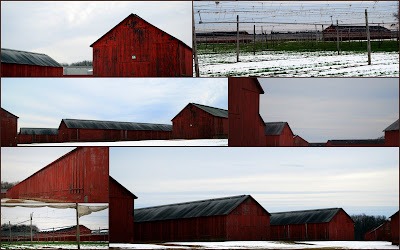 Connecticut tobacco farms go back to the time of the Indians as tobacco was already being grown by the native population when the first settlers led by William Holmes came to the valley north of Hartford in 1633. By the 1830's, tobacco was an established industry in the Connecticut River Valley and tobacco farmers were experimenting with different seeds and processing techniques. Even though there are significantly fewer tobacco farms than there used to be - the number of farms peaked at 200 on over 15,000 acres between 1900 to 1921 - some of them have remained in the same family for six generations and are still going strong though the amount of acreage currently in use for growing shade tobacco is only 2,000.

In the summer months when you pass the massive red drying barns that you can see in the above pictures, you'll also see acres and acres of white shade tents which are designed to filter the sunlight and raise the humidity and ambient temperature providing the optimal conditions for growing the fields of tobacco underneath them. The shade tents are constructed by setting posts in a grid layout and then wires are stretched from post to post and covered with a light, durable fabric (once cotton but now a synthetic fiber) that is tied across them and draped along the sides. In these pictures you can see just the posts and the wires which are all that is left during the non-growing season.

It was nice to stop and take in a little bit of Connecticut history as that helped to take my mind off of the fact that the passenger side of the car was empty and there was no one chattering nonstop or turning up the sound on the CD even though it was already close to deafening! As it was, my pensive mood wouldn't have a chance to last too long as shortly after I pulled back onto the highway to continue my journey home my cell phone buzzed with a reminder that even though I had just dropped one daughter off at the airport, there was another waiting at home and she wanted to know what I had in mind for dinner.