Pardon me for a moment while I roll out a bit of what could probably be called old fogeyism in today's post but this particular thing has been bothering me for awhile and what better place to vent about it and get it off my chest then right here on my blog? After all, it's why I have this thing, right? So that I can occasionally air my opinion and then wait for everyone else to come by and either validate it or tell me that I'm wrong!

Okay then, the thing that's bothering me is this ... since when did politicians in this country achieve celebrity status? Has anyone besides me noticed that Hollywood is going a bit overboard in regards to our new First Family that will be moving into the White House soon? 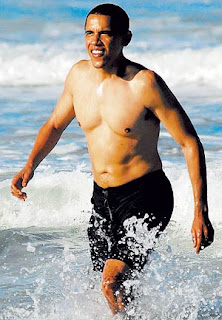 It's not just President-Elect Obama whom the paparazzi are chasing down on the beach or First Lady-in-Waiting Michelle Obama whom everyone is waiting on with bated breath to see what she wears to the inauguration and all of the over-the-top parties that follow but it's also the new First Kids whom are being elevated to - dare I say it? - Miley Cyrus status.

I had the TV on the other night so that I could get an idea what Old Man Winter had in store for us and upon completion of the news, the channel that I had on sequed into one of those annoying "television magazine shows". I'm not sure if it was "Extra" or "Inside Edition" or "Entertainment Tonight" or what the heck it was as I wasn't really paying that much attention and had just neglected to turn the TV off but, regardless, I looked up when I heard one of the Hollywood reporters talking to a designer who was just gushing over potential bedroom decorations and furnishings for Malia Ann and Sasha. My initial thought was "Why?" quickly followed by "You've got to be kidding me!"

Never in the course of my 50 years can I ever remember anyone giving a hoo-rah-damn about what the bedrooms of the kids moving into the White House were going to look like! And there have been plenty of kids occupying the White House during the course of that 50 years so don't tell me that it's a new phenomena to have a couple of kids moving into the Presidential residence with Mom & Dad.

Wondering whether or not it was just me that had noticed this rather disturbing trend of Hollywood following every move the new First Family makes, I went in search of verification on the internet and came across this little piece ...

TV Week's Andrew Krukowski reports that "Access Hollywood" and "Entertainment Tonight" will continue to cover the Obama family in detail: It's a symbiosis in which shows such as "Access Hollywood" and "Entertainment Tonight" cover the Obama family like royalty, bringing back a Camelot mythology to the White House. In return, they are enjoying a ratings bump with unexpected staying power. "We're going to treat the Obamas like a Hollywood family," said Rob Silverstein, executive producer of NBC Universal Television Distribution's "Access Hollywood."...

Are you kidding me? Have ratings become such a precious thing in TV Land that we are willing to treat the family of the man who is supposed to be the most powerful leader in the free world and bring about massive amounts of change like the Osbournes? Geez, Louise, next thing you know they're going to be wiring The White House like the "Big Brother" house so that we don't miss a single moment!

This is where the old fogeyism I mentioned above comes into play when I say quite emphatically that we need to cut this stuff out right now before it comes back to bite us in the butt. Politicians are NOT celebrities. 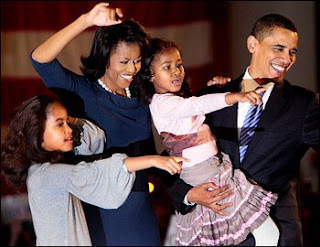 Even when Ronald Reagan, who was an actor and a celebrity long before he became a politician, was in office he wasn't treated like this and neither was his family. The media knew where to draw a line and they stayed on the other side of it. Sure, everyone liked to see what Nancy was wearing from time to time but they didn't roll it out on the evening news or the type of show that tells you when Brad and Angelina are expecting their next kid or if Britney managed to stay out of rehab for another day. WAKE UP, AMERICA!!

Barack Obama is NOT the new John Kennedy and Camelot is long gone and doesn't need to be resurrected. Besides which, if you were to look under the surface of the Kennedy Administration you'd see that it wasn't all royalty and roses there either - the man was a womanizer, he just did a better job of keeping it under wraps than Clinton did. He was cut down by an assassin's bullet before he had a chance to do something stupid with his Presidency and so he died a glorious hero rather than a goat like Nixon who was a brilliant President but managed to shoot himself in the foot and the only thing people can remember him for is Watergate rather than the end to the Vietnam War and his other many accomplishments. 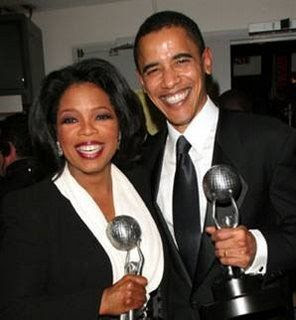 President-Elect Obama needs to be his own man and he needs to be given the chance to prove that he can lead this country without Oprah and the rest of "Hollywood royalty" showing him the way. Let's leave the actors and actresses where they belong - on the movie sets and stages - while we put the politicians back where they belong - in Washington leading our country and NOT entertaining it.

We are setting a really nasty precedent here and - honestly - I feel like our country is beginning to lose its credibility in the eyes of the rest of the world because of stupid stuff like this which will only get worse as the media turns everything into a circus and a made-for-TV moment.

I don't know about the rest of you but when I turn on the television I want to hear about how my new President helped our struggling economy or addressed the number of other myriad issues facing our Nation - not what piece of furniture the new puppy chewed on, what Michelle is wearing, or how the kids did on their latest report cards. I don't cast my vote at an election to be entertained, I cast my vote for leadership and representation.