Dinner and a Show

It has been said that "all work and no play makes Jack a dull boy" but I gotta tell you - it's not just Jack who suffers from such a calamity! Ever since I decided to move someplace that has hot water and a landlord that wasn't going to make me feel bad if I had the nerve to ask him to fix something, I've been using just about every available moment outside of work to get my worldly goods out of the old place and into the new. It's made for a stressful couple of weeks in more ways than one so when my son asked me if I wanted to go out to the Fuji Garden Japanese Steakhouse in Pawcatuck this past Saturday to celebrate his wife's birthday, I thought it sounded like fun and said "sure".

Amanda and I had joined Mike and Laura at the same restaurant two years ago and not only was it fun to sit at a hibachi table and enjoy the show that our chef put on but the food was also very tasty so I was definitely looking forward to the night out, especially considering I spent the entire rest of the day hauling things in and out of one house or another. A break was definitely needed! Before I went, though, I needed to stop and pick up a couple of birthday gifts for Laura though I was on my own as to what to get her as Mike had said the only thing she wanted was a night out.

After giving it a little bit of thought, I decided that it might be nice to get Laura some 'girly stuff' being that she lives with three guys - my son and two grandsons. To that end I bought her some coconut and lime soap and body lotion, a box of European chocolates, and a candle that not only looked exactly like a jar of maraschino cherries but smelled like it, too! The only thing missing was vanilla ice cream, hot fudge, and some whipped cream!

I ran home, quickly wrapped the gifts, and changed clothes before heading out to make the drive over to Pawcatuck, a small town near the Rhode Island border. Even though I hate to be late, I had a feeling I was going to be as traffic past Foxwoods Casino was its usual pain-in-the-driver's-seat no matter that their profits have plunged with the current economic status of the country. I guess people still figure they need to go out on a Saturday night and the casino is apparently as good a place as any.

Dinner was set for 6:00 and I got there at about 5 minutes past so met up with everyone else already sitting around the hibachi table. Joining us were Mike's friend and best man at his wedding, Bill (who also had helped Mike the week before in moving most of the furniture out of my old house - thanks, Bill!); Tom, an EB co-worker; and Beth and Eric, more co-workers. If it seemed strange to any of them that Mike's mom was joining them for dinner none of them acted like it and I didn't feel at all out of place around a table of young 30-somethings. Besides, isn't 50 the new 30? I think I read that somewhere and if that's the case, I fit right in!

Our table was the one on the left and because I'm a dope lately and totally forgot to bring my camera, I got the above picture from the restaurant's web site. The other picture in this post was taken with my cell phone camera so it isn't of the best quality but I think you'll get the general idea!

When I arrived everyone was ordering sushi, something that I really haven't been able to get into even though two of my three kids just love it. Mike told me that he was going to give the sea urchin (Uni) a try as he'd heard it was supposed to be good. Yeah ... okay ...! Bill, who is apparently quite well-versed in the stuff, was having an assortment of sushi for dinner as opposed to a hibachi meal and when the platter arrived, I had to admit that it all looked and smelled good even though it isn't something I care for. It made me laugh, though, when Mike tried the Uni as his face was similar to that of a baby's when you give him or her some new food to try - somewhat quizzical and perplexed and not quite sure whether to swallow or spit! He said that the taste was okay but he didn't really care for the texture at all; either way I give him major points for being brave enough to try it!

Shortly afterwards our chef came out and fired up the hibachi grill - literally! 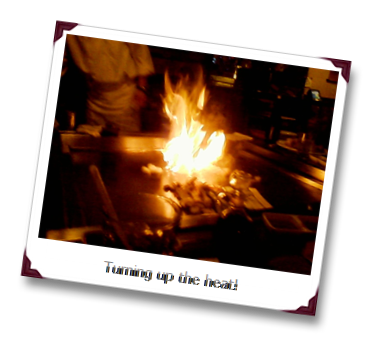 I love to watch these guys prepare the food as they flip their knives and spatulas, chop and dice at the speed of light, and crack jokes all at the same time. They are true artists at what they do and it's one of the most fun dining experiences ever! It's most definitely dinner and a show and well worth the extra charge that you pay to sit at a hibachi table. If you've never had the pleasure, may I suggest you try it sometime - I guarantee you won't be disappointed!

My steak and chicken was absolutely delicious as was the fried rice, noodles, and vegetables that I had on the side. Everyone agreed that the food was great and plentiful and there wasn't a single one of us who had room for dessert. Most everyone else was enjoying a bit of Sake with their meal but knowing that I'm a lightweight when it comes to alcohol, I opted to just have a diet soda. Because it was her birthday and Mike was driving, Laura was quite enjoying the Sake and the night out for her birthday and everyone really seemed to have a good time. It was a very nice way to spend a Saturday evening and I was really glad that I was asked to join in the celebration - it sure the heck beat staying home by myself and opening a can of soup to dine on amongst the packing boxes!

At the end of the evening, the leftover sushi was boxed up to be sent home with me for Amanda to have later (she was over at her friend Cate's for the night) and I headed for Norwich with a full stomach, the memory of a nice night out, and the knowledge that I seemed to have done a decent job in raising my son if his choice of wife and friends were any indication. Now I ask you, what more could a mother want?