VD Spent in the ED - Or Something Like That!

Luckily I live about two-three blocks away from Backus Hospital so after carefully getting dressed, I told Amanda to come along in case I wrecked the car or something, and we drove the short distance over. The place was nowhere near crowded as I limped in and I was hoping that meant I wasn't going to sit in triage long but after watching one person after another who came in after me being called in, I finally sent Amanda over to inquire as to my status being that I was in quite a bit of pain. The not-incredibly pleasant nurse behind the desk told her that I was next and within a few minutes she called my name then looked on as I struggled to my feet. Sitting in one spot for 50 minutes had not been a good thing.

As she took my vitals and asked what the problem was, Amanda said something about maybe I should have gone via ambulance as I would have been seen sooner and the not-incredibly pleasant nurse told her that my situation certainly didn't warrant the abuse of calling an ambulance. I told her no kidding, that I dispatched ambulances and saw people use them for stupider things on a regular basis so I wasn't about to call one just because I had 7 out of 10 back pain and could barely ambulate. The not-incredibly pleasant nurse than sent me in the direction of Convenient Care so I shuffled down the hall and was greeted by a much nicer staff.

Amanda found it incredibly amusing that one of the nurses looked at me and said "Hey, you work at American Ambulance, don't you? I see you on a lot of people's Facebook pages!" Ah, notoriety! They immediately showed me into 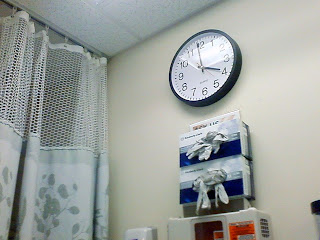 an examination room where I waited rather uncomfortably for probably about another 30 minutes before a Physician's Assistant came in and checked me out. I really didn't expect that there was much of anything that could be done in an ER setting but she gave me prescriptions for Vicodin and Valium and told me that should at least get me some rest until I could get back on my feet and in to see my ortho doctor. After warning me to not to drive after taking the Vx2 combo, she wished me well and sent me on my achy way.

Luckily, the closest CVS is not far at all so I carefully drove over there and had my pills in less than ten minutes. I grabbed some orange juice and a box of Puffs to help with the cold I've got on top of the backache and then came home to climb into bed after drugging myself up and hoping for a relaxing sleep and better day to follow. Actually, I'm rather impressed at my typing abilities here what with the combination of drugs coursing through my system!

So, it turns out that the only scenery I saw this weekend, other than the ceiling in my bedroom, was that out of the room I was in at Convenient Care which is depicted above. I'm actually surprised I had the foresight to grab my cell phone and take the shot considering I was really just hoping someone would come in and put a bullet in me at that point but I had a feeling it could be used in a blog post!

For now, I am going to roll over, turn out the light, and see where the drugs take me. With any luck I'll be able to be back at work tomorrow for my Sunday double as I really can't afford to miss two more days of pay but if not, at least I'll be able to rest comfortably here at home and should be comfortably numb enough not to worry about the money - for now!

Hope everyone else had a better Valentine's Day than I did! Oh, and a big THANK YOU to everyone on Facebook who left me such nice messages - it's really great to know that there are folks out there who care about me!