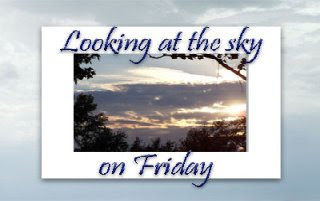 Being that I have missed the past couple of Fridays and Tisha's fun new meme, I thought it was about high-time I got back into the swing of things and posted a picture of the sky as seen from in front of my old house for what was most likely the very last time when I took this picture Thursday afternoon. 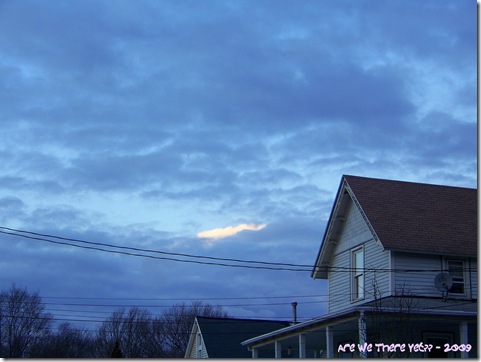 Yesterday was very windy with clouds of all sorts marching across the skies but I thought that these were rather appropriate as in the midst of the dark clouds, a white cloud was shining through and I'm going to take that as a sign that things are going to go very well for Amanda and I in our new apartment. Granted, I managed to throw out my back while finishing up the cleaning at the old place yesterday when I bent down to clean off a baseboard but it just figures that I couldn't get out of there without one final backache considering that's the place I lived when I first started having back problems!

At any rate, the keys were left on the counter along with a final check for the old landlord (half-tempted as I was to not pay him at all due to the lack of hot water for several months) after I took lots and lots of pictures to show that there was no damage to the place and that it was left clean just in case he follows through with his threats and takes me to court. Suffice it to say, the guy was not happy when I called in the Building Inspector's Office and he got written up for quite a few code violations but I never would have called had he just fixed the hot water like I asked him to do. He even threatened to evict me if I weren't gone by the move-out date of February 15th that I gave him! Are you kidding me?? Oh well, I think that was just fate's way of telling me it was time to move on to a nicer place with a nicer landlady.

Once my back starts feeling better, the next step is to get my life unpacked from all of these boxes that are piled up in the new place and then start taking pictures of the sky over my new home. Maybe I'll get lucky sometime and capture a rainbow overhead!

Don't forget to pop by Looking at the Sky on Friday and check out some other beautiful views. I know for fact that one of the pictures you can see is of a gorgeous full moon over Georgia just by going here. Feel free to tell the blog owner that I'm jealous!

Speaking of blog owners, hop on over to Asara's Mental Meanderings and wish Carrie a happy birthday on this Friday the 13th! Hopefully she'll have a lucky day full of wonderful things as well as a fantastic year to follow! Happy Birthday, Carrie!!