In honor of my upcoming trip out to Block Island in June that I wrote about the other day, I thought that I would look through my archives and find a sky picture or two from my trip out to The Block last September to use for this week's edition of Tisha's Looking at the Sky on Friday. I'm psyching myself up for some of the beautiful sky views that I'm sure I'm going to see while I'm enjoying my 3-day respite on a beautiful island out in the Atlantic Ocean!

These two shots were both taken from the deck of the ferry that we took from Point Judith out to Block Island, which is considered to be a part of the State of Rhode Island and sits 12 miles off of its coast. The sky was definitely doing some interesting things as we made our back to the mainland and there was even a small rainbow greeting us as we pulled into the docks! 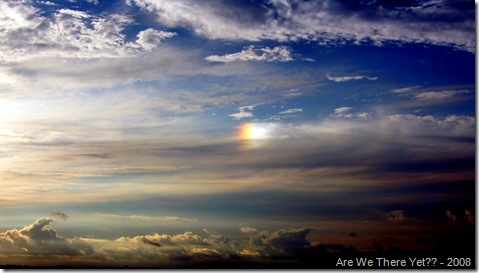 When I go out in June, I will be taking the high-speed ferry from New London, Connecticut so the trip will be a bit longer even though it will be a lot faster. It takes about an hour to get from New London out to The Block but if I'm lucky we might pass an interesting lighthouse or two along the way and that will make the trip more than worthwhile!

For more beautiful sky shots, be sure to go over to Tisha's and check out the linkies to see who else has joined in her popular new meme this week. Matter of fact, why not join in and play along, too? I bet you've got a beautiful shot or two of the sky yourself, don't you?!?