A Photo Meme & A Grand Award

Recently I was tagged for a Photo Meme by both Tisha of CrAzY Working Mom and Ralph at Idaho Photo. Luckily the meme requires that I go back into some old photo files and that's a good thing as I haven't been able to take my camera out for any new pictures in way too long. I'll spare you the litany of excuses as to why that is!

Anyhow, like any meme does, this one comes along with a short list of rules so here they be and then I'll dig up that 6th Folder/6th Picture for ya ...

***Rules***
1. Go to your Picture Folder on your computer or wherever you store your pictures.
2. Go to the 6th Folder and then pick the 6th Picture.
3. Post it on your blog and tell the story that goes with the picture.
4. Tag 5 other glorious peoples to do the same thing and leave a comment on their blog tellin’ them ’bout it. 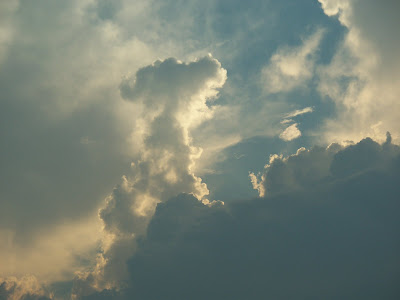 Turns out that the 6th folder in my pictures file is one dated 07212008 which is the date that Jamie flew back to Tampa last summer after her visit. Wouldn't it just figure that picture #6 is of clouds as that was the summer that I was taking cloud pictures by the score it seemed. These beauties were visible overhead at T.F. Green Airport where Jamie was catching her flight and it was just shortly after her flight took off that the heavens opened up and rain came down in torrents. Kind of matched my mood at the time, truth be told.

Now let's see ... Who to tag? Who to tag? Hmmm ... well, in celebration of her blog being back up and running in our Readers I tag Amazing Gracie at Echoes of Grace; because she just had a birthday I shall tag Carrie of Asara's Mental Meanderings; because he has a birthday coming up I'll tag Morgen of It's a Blog Eat Blog World; because I'm sure she's got something interesting up her sleeve I'll tag Jamie of Duward Discussion; and because she has to suffer through that which is the state of the State of California lately, I will tag Carol of A Letter to Me ...

Following the tag for the Photo Meme, I inadvertently managed to step into an award/tag of sorts when Ivana decided that she was going to pass along the award that she had gotten onto the first five people to leave a comment on her post. Well, as it turned out I was the first person to leave a comment and it seemed rude not to accept the award and the rules that came along with it (good grief, people, do you think it would be possible to develop an award that doesn't require rules that go along with it?!?).

Anyhow, the Life is Grand Award says you must list five reasons why you think life is grand and then pass it along to five other bloggers. Yeah, yeah, yeah ... well, I'm bending the rules a bit this time and NOT passing it along to five other bloggers (unless you really want it in which case feel free to grab it & go!). After all, I'm sure I've already got five other bloggers grumbling about the tag I hit them with above but if they've any complaints they can register them with the Queen of Memes and see if there are any vacancies in the dungeon at Bloggingham!

Anyhow, enough of that ... on to the five reasons that I think life is grand - and it's a good thing I'm writing this now rather than two days ago as I probably couldn't have thought of one reason life was grand - never mind five!
And there you have it - five reasons why, this week, life is grand. Were you to ask me to list five reasons next week, they'd probably be different but that's one of the great things about life - it's always changing and evolving and that's what really makes life grand!

Everyone have themselves a grand Wednesday no matter what it finds you doing! I shall hopefully be able to last my entire 16-hour shift at work this time around as I think that the worst has passed and I'm getting my strength back (though I still feel a little weird around the edges for lack of a better way to put it!).
Posted by Linda at 2/18/2009