Pictures From My Past

One of the advantages of moving (other than the chance to clear out a lot of clutter) is the possibility of finding things that you thought you were long gone - or better yet - things that you had completely forgotten existed to begin with! Such was the case while clearing out a back room at my old house and coming across a couple of photo albums whose existence had long since been erased from my memory banks. Funny thing is, what with one of them being an album of pictures from my wedding in 1991, you would think that I would have remembered it!

How those albums came to be in an unused, blocked off portion of the house (a room off of the back mud-room that my former landlord had always promised to turn into a second bathroom/laundry room but never did) is beyond me. I thought that the albums had gone with my ex-husband when he moved out in 2001 or had just been tossed and I honestly hadn't given a thought to them in years and years so it was quite a surprise to find them.

After getting them back to the new place and looking through them a bit, I thought it might be fun to scan a few of the pictures and post them here to show you what I looked like almost 18 years ago when life seemed a lot simpler than it is now. Obviously, the years have not been good to me and it's rather dismaying to see how much I've changed over the years but I guess that's all part of the progression of time, isn't it? Honestly, though, I'm still trying to figure out where all those years went!

I'm afraid that the quality of these pictures is none too good being that they were sitting rather unprotected out in that back room (they all need to be taken out of their current album, cleaned up, and put in a new one) plus they lose a bit in the scanning process but hopefully they'll pass muster here. All of the wedding pictures were taken by Judy, my former roommate from California, who flew out for the occasion but whom I have lost touch with.

This first picture was taken on the morning of August 17th, 1991 at my grandmother's old house where Mike and I were living before I remarried. The mirror that I'm looking in was hers and I'm not sure if I was more worried about the necklace I was wearing or the butterflies that were gathering in my stomach but I guess you could say that I look rather contemplative. Or is that scared? 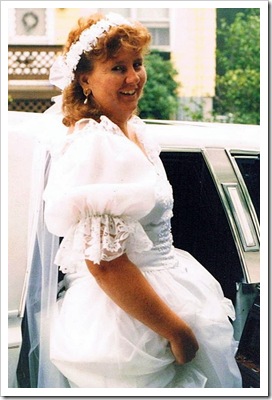 In this next shot I'm getting into the limo that had come to pick up myself and my bridesmaids to take us from my home in Canterbury to the church at the Naval Base in Groton. My ex-husband was a Navy man and we got married in the Chapel of the Sea (though it was nowhere near the sea!). Due to the massive amount of butterflies churning in my stomach that had increased exponentially since I was looking in the mirror, I told the limo driver to go to either New York or Boston instead of the chapel but he obviously thought I was joking and continued on to Groton! He had probably dealt with a lot of brides with a case of the nerves and I had a major case!

Once I got through the wedding service itself (I distinctly remember wondering if it would be really bad if I went and sat on the steps in front of the vestibule for awhile as I was starting to feel really sick at one point), I seemed to finally relax a little - as this next picture which was taken after the service shows ...

Of course, what you don't see here is the champagne glass that was next to me on the roof of the limo! I don't think, though, that it was the champagne that had caused me to finally relax - it was just knowing that the stress of the whole wedding was over. When I got married the first time, it was in the reception area of a dentist's office in New Jersey (the guy was a Justice of the Peace) so there was no pomp and circumstance or ceremony but the second time I got married, I wanted to do it right - hence the white dress, et al. The dentist's office was much easier!

In looking at these pictures now, the main thing I keep thinking is - "wow, my hair looked kind of nice!" I showed a few of them to one of my co-workers when she was over on Tuesday helping paint Amanda's room and she told me what a really nice smile I had (considering she said "had", I've got to take it that means I don't smile all that much now which is not a good thing).

Getting back to my hair, this last picture was taken in the White Mountains of New Hampshire while we were on our honeymoon.

Feel free to tell me how very 90's my hair was as it's true but at least I had hair that wasn't flat and impossible to do anything with like it seems to have become 'lo these many years later! Just goes to show what ten years of marriage, giving birth to two more children, and going through a divorce will do to a person ... ah, if I only knew then what I know now ...

I hope you enjoyed this brief stroll down Memory Lane with me. Perhaps I'll get the chance to scan a few more pictures to share with you sometime in the future; I'm sure there is a lot more "undiscovered" stuff hiding in the boxes piled up around here - finding it can be one of the fun parts of moving!