Sailing Away to Block Island ... Eventually!

Last year I was fortunate enough to be able to take some time to visit friends and family in California in May and then spend a week at a beach house in Rhode Island with some of the best bloggers ever in September. Two vacations in one year is pretty unprecedented for me and most definitely won't be happening this year; however, I have decided that I have earned a few days to myself and as such, have booked a room at The Inn at Block Island for three nights in early June.

Those of you who are regular readers might recall my post from last September when we all boarded the Block Island ferry and made the 12-mile trek off of the coast of Rhode Island to spend the day on an island that I found simply enchanting. As we were taking the ferry back to the mainland I promised myself that I was going to go back out to the island and spend more time there sometime in the future even if it meant going by myself. 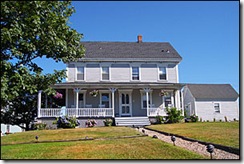 While recovering from my recent back problems and lying in bed with lots of time to think, the thought occurred to me that if I was going to keep that promise to myself and go this year I might want to get with the program and see about booking a room somewhere before they were all taken. Originally I was thinking of staying at one of the Island's Victorian hotels but they were a little pricier than what I wanted to pay and after doing some looking around online, I came across the place that looked absolutely perfect for my purposes. 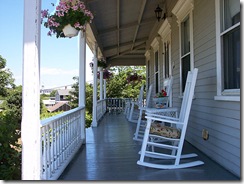 The Inn is a house that was built in 1900 for a sea captain and his family that was converted to a bed & breakfast in the 1980's; it has nine guest rooms and a beautiful wraparound porch where guests can either sit in rockers and relax or partake of the hearty breakfast they serve as well as afternoon refreshments. 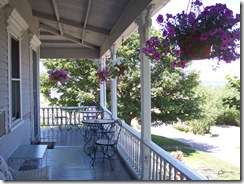 From the pictures on their web site (where all of these pictures of the Inn came from), the house appeared to be exactly like the type of place I was looking for and when I found out that they were offering a "book two nights, get the third night free" deal for late May/early June (definitely a best buy on the island!). I decided it was more than perfect and promptly got in touch with the innkeeper to make my reservation for June 9th to the 11th. 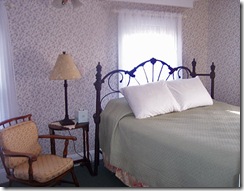 The room I booked is called The Bayberry and it is situated on the second floor with an ocean view, queen-size bed, and private bath. There is a deck that is shared with another room but that's just fine by me as even though I'm going on this journey by myself that doesn't mean I plan on being a hermit for the entire 3 days! Who knows, maybe I'll get lucky and there will be a handsomem single gentleman in the room next door who decided he needed a 3-day getaway, too, though I'm not going to hold my breath on that of course!

While on Block Island I'm hoping to spend some time exploring the island via both foot and moped, taking lots of pictures, and just relaxing - perhaps with a good book - perhaps not. The Inn has wireless Internet and satellite TV but I'm already thinking that my laptop will be staying home on this trip though my Nikon is definitely going along for the adventure! 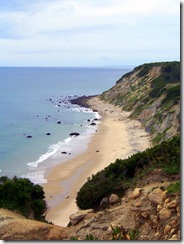 I don't know what it was about Block Island that I found so enchanting when I was out there for that one day last September but I plan on giving myself ample time to see if I find it to be so again while I explore the two lighthouses, great salt pond, and rolling hills of a place that looks like something out of a Jane Austen novel. And even though some might think it strange, I'm really looking forward to going by myself for what I hope will be just the right amount of rest and relaxation.

Now if I can just learn to be patient until June gets here!