Sense and Sensibility and Sores

While spending pretty much an entire day in bed again yesterday (I felt better but not quite well enough to go out dancing), I got to thinking about how completely and totally uncomfortable one's bed can become when one is confined to it for long periods of time. After almost three full days of "bed confinement", I can fully empathize with patients who suffer from bed sores and the like as I doubt there's too many places on me that aren't heartily sick of contact with a mattress or pillow.

For some reason, this then got me to thinking of the part in Jane Austen's "Sense and Sensibility" where Marianne Dashwood comes down with a nasty case of what I guess was putrid fever (typhus) after becoming horribly depressed and standing in the rain while staring longingly at the home of the man she loved who abandoned her for Miss Grey, a woman of money and title.

Poor Miss Marianne is quite overcome and takes to bed for quite a long period of time while Colonel Brandon (admirably played in the movie by Alan Rickman) is beside himself with worry as he is quite taken with Miss Marieann himself. The doctor is called in for some "bloodletting", a rather common medical practice at the time that was thought to help purify the blood from whatever disease was attacking it and heal the patient. I could get into a whole discussion here about how it was bloodletting that first determined the difference between surgeons and physicians and the origin of barber's poles but perhaps I'll save that for another day!

Suffice it to say that after an extended period of time, Marianne comes around from her illness (with apparently no mention of bed sores!) and finds that her affections have now turned towards the very kindly Colonel Brandon who, though not as dashing as young Willoughby, loves Marianne beyond reason and what woman could resist that in a good man?

In addition to that happy ending in the book, we also get to cheer when Elinor and Edward are finally united after a series of happenstances that make one think that the love they have for each other is overwhelmingly doomed. All in all, "Sense and Sensibility" is one of my favorite Jane Austen novels but that's probably because it appeals to the incurable romantic in me.

Now, if you're wondering how on earth this post started talking about the aches and pains of being in bed for way too many days into a short review of a Jane Austen novel just bear in mind that I have had way too much time on my hands to think and not do much else! Just be glad I'm not posting any of the strange dreams I've been having lately where I'm panicking because I have one more room to pack up and move before the evil landlord takes over the house! Trust me, I'd rather be thinking about Alan Rickman or even Hugh Grant! 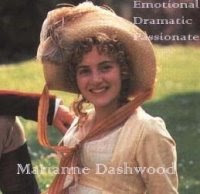 As an addendum to this post - Jamie had left a link in her comment to take a quiz to see what "Sense and Sensibility" character I might be. It sounded like fun so I gave it a go and lo and behold -

"You're Marianne Dashwood of Sense & Sensibility! More dramatic and emotional than your sister Elinor, you have no trouble saying what you think and showing people how you feel about them. However, you usually know when to keep your mouth shut."

Well, I'll be - who knew?? Though I'm pretty sure there are those at work who would argue with the part about knowing when to keep my mouth shut! If you'd like to take the quiz yourself, check it out here and a big thank you to Jamie on the West Coast! Now if my Colonel Brandon would just show up and sweep me off my feet!

Email ThisBlogThis!Share to TwitterShare to FacebookShare to Pinterest
Labels: health, Sense and Sensibility