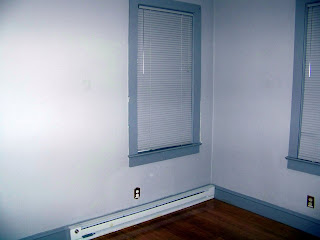 Back when I first rented the new humble abode, I went through the house and took a series of pictures to show people what the place looked like. Some of you may remember that this was what the bedroom that ended up being Amanda's looked like. The walls were a light gray and the trim work was a darker shade of gray. It wasn't bad but Amanda had this great idea that she wanted to have her new room done in black & white stripes with red for the trim work. 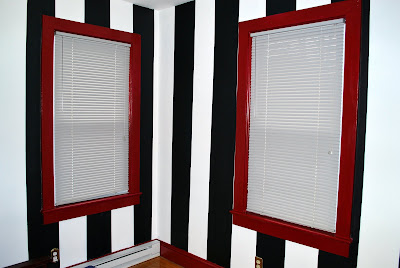 Thus began the longest painting job that I have ever done in my entire 50 years due to the fact that Amanda, despite being quite skilled with pencil, pen, and Sharpie, pretty much sucks when it comes to putting paint on walls. I wonder if Michelangelo found that he had the same problem when he began painting the ceiling of the Sistine Chapel?? Probably not ... 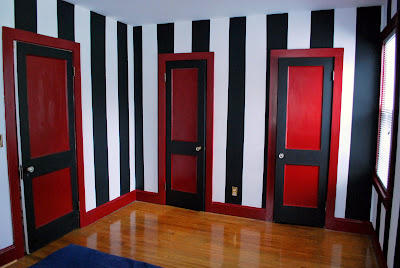 Even though Amanda had this great idea for her room, she didn't really know how to execute it. Fortunately, I work with a lady who is an amazing artist and she came over and measured out the lines and did some of the initial taping. Thanks, Baby Liz! Her schedule, though, prevented her from getting back over here so the rest somehow ended up being left to me of the bad back and works-way-too-many-hours-so-how-do-I-find-time?? Add on the fact that my anal retentive Virgoness will not allow me to do a half-baked job even when I'm sick to death of a project and you can understand why this took almost a month! 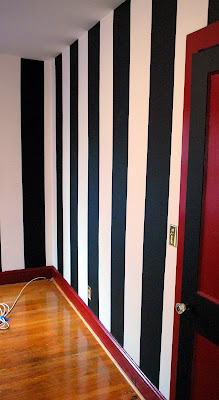 However, at long last I am more than happy to say that IT IS DONE! I put the last coat of paint on the closest doors, pulled all of the tape, touched up the few spots that needed it, and called it finished around 1:30 Friday afternoon - just in time for me to get ready to go to work!

Luckily, the room came out looking pretty darned cool and Amanda is quite happy with it (she had better be!) so now we can start getting furniture moved in and maybe I can get the rest of the house organized a month after we've moved in. Personally, I'm getting a little sick of looking at all the boxes that are still stacked up all over the place!

Before I do that, though, I'm going to take some time to enjoy the nice weather this weekend and go take some pictures. The boxes have just been sitting there this long - what's one more day going to hurt at this juncture??
Posted by Linda at 3/07/2009