Love and Torment With Ralph Fiennes

As I've mentioned in the past, due to the fact that my dispatch partner and I both work 16-hour shifts on Sundays we initiated what we call "Chick Flick Sunday" wherein we get three movies each week from NetFlix and watch them in between our regular dispatch duties. Some Sundays we get the movies watched pretty quick and other Sundays it takes us a lot longer as we keep having to pause the DVD player. Still, it makes the day go by much quicker and we've watched some great movies that I never would have seen had we not instituted "CFS". 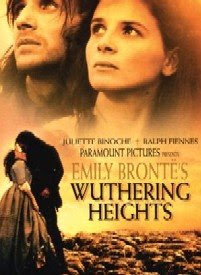 This past Sunday, one of the movies we watched was the 1992 version of Emily Brontë's Wuthering Heights, a book that I have to admit to having never read. After seeing the movie, I'm going to have to get to the library and amend that - soon. The book has been adapted into at least four movie versions and two television series and even though the most famous is the 1939 version starring Laurence Olivier which was nominated for the 1940 Academy Award for Best Picture, the one that we watched on Sunday was the version starring Ralph Fiennes and Juliette Binoche (who act opposite each other in "The English Patient", another film we've watched on CFS).

The main reason that I added this movie to our NetFlix queue was because Jen and I both adore Ralph Fiennes and almost all of his movies are in the queue (what can I say? he's ROWR!) but I think that even had Ralph Fiennes not been in this film, I would have loved it even though it's definitely not a happy story. For those not familiar with Wuthering Heights, in a nutshell it's the story of Heathcliff and Catherine Earnshaw whose all-encompassing, passionate love goes horribly awry and eventually destroys not just each other but most of those around them.

Amanda recently read the book in school and when asked how she would describe Heathcliff she said "evil, but has a reason". As for Cathy the only description she gave me was "bitch". She's pretty spot-on on both counts. Amanda's feeling is that Heathcliff could have risen above his broken heart and not taken revenge on everyone and that Cathy was ultimately to blame for all that went wrong to begin with but personally, I think that Cathy's brother, Hindley, is to blame for putting the wheels in motion for had he not treated Heathcliff like a second-class citizen rather than the foster brother that his father had intended none of the rest would have happened.

During a break in the film on Sunday (I think a 911 call had come in or some such thing), I told Jen that I just never understood how anyone who proclaimed a love for someone like Cathy did for Heathcliff could ever marry someone else. They were soul mates, twin souls, each other's half and to ignore that just seems to be betraying your own heart and how do you live with that? At one point Cathy tells Nelly, their housekeeper -

"My love for Linton is like the foliage in the woods: time will change it, I'm well aware, as winter changes the trees. My love for Heathcliff is the eternal rock beneath: a source of little visible delight, but necessary. Nelly, I AM Heathcliff!"

Unfortunately, Heathcliff doesn't hear this part as what he overheard and which mattered most to him was Cathy telling Nelly that she was going to marry Edward Linton as "It would degrade me to marry Heathcliff now." Upon hearing that he takes off for two years and in the interim, Cathy does, in fact, marry Edward even though she still loves Heathcliff.

Jen's response to me was that during that time in history, if a woman wasn't married then she had nothing and Cathy was probably acting upon that in choosing to be with Edward once Heathcliff disappeared. Plus, she said, Cathy did wait for a time but Heathcliff didn't come back. Whereas I do get that part, I think I would have chosen to have nothing than to be with someone other than my own true love with the hope that eventually he would come back and not just decided that waiting two years was long enough; true love knows no time limitations.

Unfortunately, though, by the time Heathcliff does come back, it's too late as Cathy has married Edward and won't leave Edward which then sets Heathcliff on his path to seek revenge on all who have kept them apart. That's where Amanda says he should have taken the high road and even though I agree, I can kind of understand where Heathcliff was coming from.

At this point in the story, Cathy takes ill and on her deathbed she and Heathcliff reconcile - more or less - as she accuses him of breaking her heart. Heathcliff however retaliates with the following - and if I didn't have a lump in my throat at this part of the movie I wouldn't have been me! -

"Why did you betray your own heart, Cathy? You loved me. And what right had you to leave me? The poor fancy you felt for Linton? Nothing that God or Satan could inflict would have parted us. You of your own will did it. I've not broken your heart Cathy, you have broken it. And in breaking it, you've broken mine."

I guess if you've never ever had your heart thoroughly and completely broken by someone you might not get it but for those of us who have suffered such a thing, Emily Brontë hit the nail squarely on the head here. Upon Cathy's death I was actually rather surprised that Heathcliff didn't throw himself into her grave after her but instead ... well, watch this rather than let me try to explain it to you ...


The movie doesn't have the quote down exactly (as most movies don't); in the book what Heathcliffe says is:

"May she wake in torment!" he cried, with frightful vehemence, stamping his foot, and groaning in a sudden paroxysm of ungovernable passion. "Why, she's a liar to the end! Where is she? Not there—not in heaven—not perished—where? Oh! you said you cared nothing for my sufferings! And I pray one prayer—I repeat it till my tongue stiffens—Catherine Earnshaw, may you not rest as long as I am living; you said I killed you—haunt me, then! The murdered do haunt their murderers, I believe. I know that ghosts have wandered on earth. Be with me always—take any form—drive me mad! Only do not leave me in this abyss, where I cannot find you! Oh, God! it is unutterable! I cannot live without my life! I cannot live without my soul!"

Obviously those are the words of a man whose heart has been ripped out, thrown upon the ground, and trod upon over and over while he tries to comprehend spending the rest of his life without his other half. Heathcliffe becomes even more bitter and bent on revenge while wreaking more havoc on the next generation of Earnshaws and Lintons until finally he joins Cathy in death where he has wanted to be all along.

It's not a happy story but it's not supposed to be. It depicts the darker side of love, the side that can destroy a person and ruin his or her life as well as the lives of others around them but I don't believe it was Heathcliff and Cathy's love that caused this great tragedy so much as it was Hindley refusing to accept the boy that his father brought into their house and the subsequent actions of that rejection. Sometimes the heart just wants what the heart wants.

At any rate, it was a movie that touched my heart and it has inspired me to read the book even though I know the story is going to be slightly different than the one the movie told. In my heart, though, I will still understand why Heathcliff reacted the way he did and not understand how Cathy could have turned her back on him to begin with. I'll never understand how someone turns their back on love - never. And maybe that explains why six years after my divorce to someone I didn't love as I should, I'm still single ... my heart wants someone I can't have and so I choose to remain alone rather than with a substitute. I guess I never would have lasted in the 1800's!
Posted by Linda at 3/04/2009