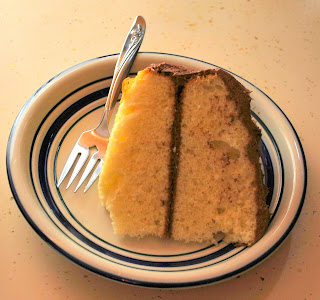 Even though it wasn't as warm as I would have liked it to be yesterday, it beat Monday's cold wind and temperatures by a mile so after spending most of the day puttering around in the house and doing things like baking a cake - a slice of which is pictured to the left for those of you who requested photographic proof! - I decided to throw on a couple of layers, grab my camera, and head out into the chilly but beautiful blue evening air.
I actually did have a goal in mind ... last week while Amanda and I were walking around the Yantic Cemetery, I caught a glimpse of a railroad bridge over the river that runs behind the cemetery. When the leaves are out, you can't see it and would never know it was there but with still no leaves to speak of (but there are buds a'plenty!) I saw not only the bridge but a place I could park and then hike in a bit to gain access to the bridge. This was my target for the evening ... not much as far as bridges go but it looked like a good spot to take some pictures. It was kind of quiet and a tad bit creepy out there in the woods by myself and I kind of wished I had brought Amanda with me but I hadn't so I was just going to have to press on by myself. After all, just because I was in the woods behind the cemetery way off the beaten path didn't mean I needed to be a wimp! This is the Yantic River as seen from the top of the railroad bridge and looking east. I'm not sure how deep the water is here and wasn't in any great hurry to find out so I was really careful walking over the bridge. I don't know what it is about me and railroad tracks lately - I must be channeling my Grandpa Joe who was my Dad's father and a big wheel at the railroad out in Kansas back in his day. I don't remember which railroad he worked for (I'll have to ask my Uncle Alton) but I do remember him taking us for a ride in an engine one time when we were out there visiting. My mother's father was always a big fan of railroads, too, so I guess I must come by it naturally! I was feeling adventerous and even climbed down underneath the bridge to take a picture or two. Of course, once I climbed down there, I was wondering whether I was going to be able to climb back up or not but I managed without slipping even once! Down a little ways from the bridge on the other side of the river is a big ole pile of railroad ties ... ... I can only imagine how many snakes and rats and other things are living in there amongst all the leaves and debris. Ugh! I wonder how long they've been sitting there? I'm not quite sure what those pieces of metal are that look like an 'S' are on the ends of some of the railroad ties. Anyone know? On the other side of this railroad tunnel is the Upper Yantic Falls that I've posted pictures of at least several times. This was the first time I'd seen the tunnel from this side but underneath looked just as muddy as it does from the other side! I thought this picture was kind of cool because you can see the setting sun shining in the trees on the other side of the tunnel. I was really kind of hoping a train might come through while I was there but alas - no such luck! Finally, this shot shows the tracks as they continue to make their way east along the river towards the village of Yantic, which is part of Norwich. There are a couple more railroad bridges up that way so chances are real good you'll be seeing pictures of them sometime, too! With any luck, there might actually be some greenery in the pictures rather than just bare branches!
I hope you enjoyed another Tuesday evening walk around part of Norwich with me. As the weather gets better, I'm hoping to get out to take more walks so perhaps this will become a regular Wednesday feature - in which case, I'll have to think of a good name for it! Any suggestions??
Posted by Linda at 3/25/2009