Let's see what not having enough coffee and sitting down at a keyboard does for me today ...

Nothing for nothing but what is up with "Octo Mom" and the way people are acting like complete and total idiots when it comes to her? Did anyone see the mob scene on the news when the first two babies came home? Pathetic! My personal opinion is that the media needs to back off, find something else to talk about, and let these poor kids try to grow up with some semblance of normalcy. Mom has had more than her 15 minutes of fame and this type of thing is just going to encourage other people to try the same thing so that they can get a "free boat", too. Truth be told, I feel bad for all 14 of those kids and think mom needs some serious counseling.

As for this company ... you have got to be kidding me! These people accepted those bonuses without the slightest twinge of conscience? In today's economy and the financial mess the country is in?? A good chunk of which was brought about by their own company?? I don't care if the bonuses were "contractual" - the company has lost more money in the past year than many, many, many people will ever receive in their entire lifetime and last I knew, you didn't get a bonus for doing a lousy job. Every single one of them ought to hang their heads in shame but I suspect the vast majority are more likely laughing all the way to the bank where they will cash their checks and then take the money home and hide it under the mattress because banks aren't all that reliable these days, are they?

As for unreliable, I heard on the news last night that our own Connecticut State Senator Christopher J. Dodd (who spoke at my high school graduation many, many years ago) is taking some heat for this entire AIG fiasco and rightly so ... I kept wondering why he wasn't taking more heat on all of this to begin with. Oh wait - that's right - everyone was too busy blaming every tiny little thing on former President George W. Bush.

Speaking of Presidents, it is my own personal opinion that "sitting" Presidents have no business going on late night talk shows no matter who is sitting behind the desk be it Leno, Letterman, or anyone else. I believe that Gracie of Echoes of Grace referred to it awhile back as "the trivializing of the Presidency" and I've got to agree with her. I'm certainly not saying that the President shouldn't have a sense of humor as he definitely needs one but I don't think that he should be sitting across from Leno yucking it up, especially this soon into his Presidency. Why is it I get the feeling he'll be making the rounds to Oprah and Ellen soon?? 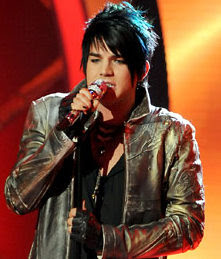 While on the subject of television, I haven't been following American Idol all that closely this season (just like I don't follow any TV show that closely) but I'm glad to see that Adam Lambert is still in the running. I'm not exactly sure why I like him - perhaps it's that Way/Leto/Wentz combination that he has going on. According to my resident teen expert, he has Gerard Way's jacket, Jared Leto's gloves, and Pete Wentz's hair - I suspect he's got some guy-liner going on, too! - but what I really, really like is his vocal range and the fact that he's willing to take chances - something not a lot of the contestants on AI are willing to do. He also looks like he could easily kick Ryan Seacrest's butt but that's just a fantasy for another day (am I possibly the only one who thinks Ryan is completely and totally annoying?!?).

And one final thing ... why do States bother to pass laws if they aren't going to enforce them? Here in Connecticut we have a law that states thou shalt not talk on thy cellphone whilst driving - or something very similar to that - and yet what do I constantly see but people driving down the road talking on their phones and not paying attention to anything around them! Do people think that the law only applies to other people and not to them? It's kind of like drinking and driving ... oh, that's only for people who can't handle their alcohol, right? WRONG! Connecticut is looking to make up a budget deficit so how about the cops start pulling over and ticketing these people who think the cellphone laws don't apply to them? Oh wait, the cops are going to have to get off of their own cellphones first, aren't they? And don't try to tell me that they're "only on them for business", I was a police dispatcher once, remember?

Oh well, I'd best go get some more coffee! Everyone have a great Thursday!