Walking to Create a World Free of MS

This week is National Multiple Scelrosis (MS) Awareness Week across the United States. MS is a chronic disease that attacks the central nervous system and is often disabling for those who suffer from it. The progress, severity, and specific symptoms of MS vary from individual to individual but can range from mild - such as numbness in the limbs - to severe - such as loss of vision or paralysis. No two people with MS have exactly the same symptoms and each person's symptoms can change or fluctuate over time depending on their course of treatment, lifestyle, and other factors.

When I was a dispatcher at the Norwich Police Department, I worked with an officer who had been diagnosed with MS and who became a civilian dispatcher like myself when his symptoms became such that he could no longer work patrol and perform his duties as a sworn police officer. Now as a dispatcher at American Ambulance, I have another co-worker in my department who was just recently diagnosed with MS this past September, shortly after her 40th birthday. 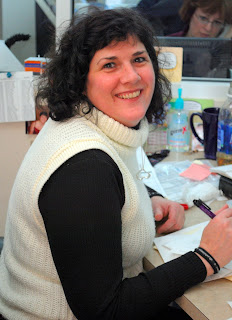 Renee Holder is our Employee Scheduling Coordinator and she has the rather daunting task of making sure that we have adequate staffing in both our ambulances and wheelchair vans on a daily basis. In addition to that, she also performs a vital function for the Finance Department insuring that our paychecks are accurate and out on time every other Thursday - something that is very near and dear to all of our hearts at American!

Trying to juggle the schedules of over 150 employees, make sure everyone's time sheets are accurate, and going home to raise four sons can be tricky on the best of days but when Renee's MS flares up, it becomes even more difficult. Renee has obviously had to make some adjustments in learning to live with MS but one thing that hasn't changed is her positive attitude and fantastic sense of humor. I could tell you her story but I think it's best if I let her tell you herself so I'm reprinting excerpts from an article that was recently published in our monthly newsletter at work.

"Growing up, I had been told that my aunt had MS, but I didn’t really know what that meant. I knew she had trouble grasping things with her hands. After my aunt moved out of state, Mom reported that her illness had progressed and that she now had trouble walking, but it was difficult for me to really imagine her symptoms.

I grew up, went to school, served my country (as a member of the U.S. Navy), got married, had children. I would think from time to time that I should participate in an MS walk or fundraiser, but I never seemed to find the time. I got divorced, got a full time job, and discovered two of my co-workers had MS. I again thought I should do something to “support MS”, but life always seemed to be too hectic. I was newly remarried, and with four boys, there were baseball games to shuttle them off to, birthday cakes to bake, play dates to set up, tag sales to throw, and knees to bandage. My cousin was diagnosed with MS around this time, and although I thought of her often, I wasn’t in touch with her as much as I would have liked because we both had our lives going on.

In September of 2008, the palms of my hands and the heels of my feet started to go numb. It had happened in the past, but never this long or this severely, and I’d always dismissed it as a vitamin deficiency or some such thing, and eventually the numbness would subside. This time was different the numbness spread, traveling up my torso until it felt like I was wearing a corset two sizes too small. Within a week, I had difficulty walking, and holding anything in my hands was out of the question. In my heart, I knew what I was facing, and within 16 days of the onset of my symptoms, the doctor confirmed what I’d already suspected: I was diagnosed with Multiple Sclerosis.

Steroid treatments have given me back my feet, but my hands are still affected. Heat causes me pain, and eating popcorn is misery the texture makes the nerve endings in my fingertips explode in agony. It hurts to wash my hair, and I have trouble putting on makeup or typing on a keyboard. I have “fat” pencils and on the days that I can’t even grasp those, I poke them through a Styrofoam ball in order to be able to write. I can no longer “high-five” my sons, nor can I clap at their games. I have lost the ability to paint ceramics, my favorite hobby, but this craft is lost to me now that I can no longer hold a paintbrush. My husband John has to give me my weekly shot, hoping that maybe this week, I will be able to hold his hand without flinching in pain.

My diagnosis has brought me closer to my cousin, and we now talk regularly about treatments, therapies, and remedies. And I started thinking again, I should do something. I should walk, for my aunt and my cousin. For my co-workers with MS, who have offered me support and advice and an ear while I struggled with my diagnosis. And for myself. I know all too well how quickly the symptoms can flare up, and I want to walk, because I don’t know if I will be able to feel my toes tomorrow."

Renee and her husband John, along with the seven other members of her team, will be participating in the National MS Society Rhode Island Chapter's 20th annual MS Walk in Narragansett on Sunday, April 19th and she has asked for my help in putting the word out for sponsors for her walk so that she can help raise money for the National Multiple Sclerosis Society. The Society is dedicated to ending the devastating effects of MS while it simultaneously funds research for a cure all while helping those afflicted with MS to lead more fulfilling lives. More than 400,000 Americans live with MS and your help can and will make a positive change in their lives. Your support is crucial and Renee, as well as other sufferers from MS, would greatly appreciate it.

If you would like to sponsor Renee and her team while making a donation to the National Multiple Sclerosis Society, please visit her page by clicking here or you can visit her team page at "Walkin' Myelin & Myel-out". I have no doubt that she, as well as countless other MS sufferers, would be very thankful any help that you can give as they walk to create a world free of MS!