Watching Someone Else Want to be a Millionaire

Good grief - I almost forgot! Last year on October 24th I drove down to New York City to attend a taping of "Who Wants to Be a Millionaire" (which you can read about here in case you missed the post!) and the airing of those two shows is today and tomorrow. This may be my big chance to be on National TV ... or not!

The shows were taped for Movie Week and it turned out that I was sitting right next to the family of one of the contestants - Jim - who played an excellent game and went home with a hefty amount of cash to follow (contestants don't get the money they win until the show actually airs). Whether or not my smiling face makes it on the television screen when they pan the camera over to Jim's family remains debatable but I'll be sure to DVR both days worth of shows just in case. 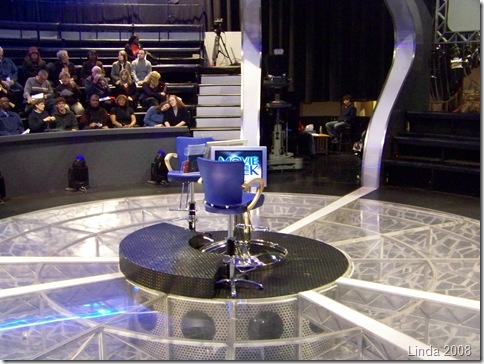 Sigh ... there it is ... the "Hot Seat" .... just waiting for me to eventually pass the darned audition test and work my way up to the million dollars. Problem is, I've taken the thing three times now and flunked it all three times. Maybe fourth time is charm? You know I'll be trying again sometime this season and I think I might just attend another taping in the process - it really was a lot of fun!

Anyhow, go watch the show and let me know if you see me - I'm in the seats behind the contestant facing Meredith - the one who really, really, really wants to be a millionaire!
Posted by Linda at 3/12/2009