I've Been Given an Award - Honestly! 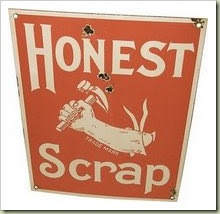 Yesterday at work was one of those days from a very warm place that no one wants to go to so what better way to relax after such an ordeal than with an award tag? (I bet you thought I was going to say a nice big drink, didn’t you?? Ha!)

The lovely Carrie of Asara’s Mental Meanderings passed along the Honest Scrap Award the other day to myself and six others after she herself received the award from Naissa of Naissa’s Rage - which I believe is a WoW blog. Where this award originally came from I don't know but I'm sure that there's some sort of meaning behind it - of which I remain totally clueless about!

Now, of course this award has to have rules otherwise it throws out the entire balance of the Blogosphere or something like that so here they are …
Whereas finding seven blogs that I think are brilliant wouldn’t be that hard as there are a lot more than seven of them out there, I’m going to be a rebel and break Rule #2 simply because I can and, to be perfectly honest, I'm too worn out to tag seven other people. If you’d like to steal this one (as Bud might say) then go ahead but I leave it entirely up to you.

Now as for listing ten honest things about myself ... that part might be a bit harder but I will give it my best shot. Seems to me that after all the things I’ve already told you folks about myself that finding ten new things might be kind of hard but if I can’t think of ten real things, I’ll fake it! Well, I guess I can’t do that or it wouldn’t be ten honest things, would it? Darn … okay … hold on while I dig deep into the “About Me” files …
Whew! There you have it – ten honest things about me put as honestly as I know how! Thanks, Carrie, for the award and I hope it’s okay that I don’t pass it along! Please don't send a troll or something after me!
Posted by Linda at 4/16/2009