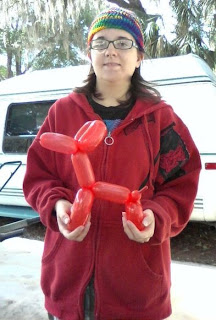 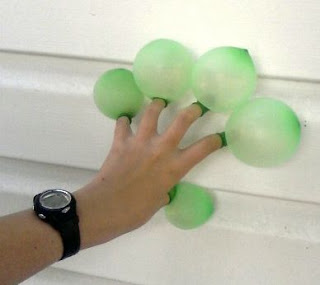 Speaking of yard sales, I guess there will be none around here for awhile as it's back to rain here in Connecticut for the next couple of days. I'm not really surprised by that as we seem to only have a couple of good days followed by more rain. I guess it's great weather for frogs, though - which is the look Jamie was going for when she stuck green balloons on the ends of her fingers! 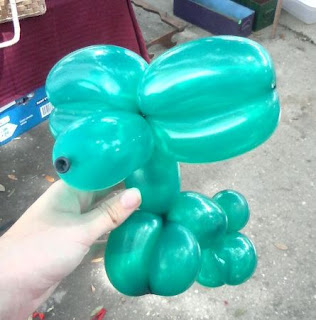 Speaking of things on one's fingers, I managed to get some poison ivy between the fingers of my left hand last week while doing some yard work and pulling up saplings at my mom's - not hanging out in railroad tunnels with hobos as some have suggested on Facebook!

I then managed to transfer that poison ivy to the right side of my face which warranted a trip to the doctor's office before work yesterday as my right eye was starting to swell shut and that didn't seem like a good thing. I'm on a 6-day treatment of oral steroids which the doc said should clear me up and I'm also armed with Calamine lotion and Benadryl to stop the itching. I haven't had poison ivy in years and I've got to say - I haven't missed it! 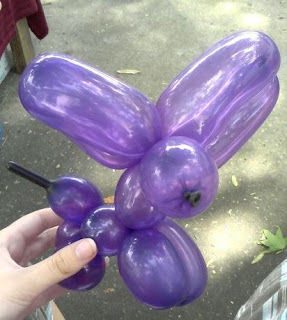 Speaking of missing things, I was supposed to go in for a dental cleaning today but rescheduled it as I didn't think the dental hygienist would want to be exposed to the poison ivy all over my face. Apparently it's not something a person can get via contact with the rash but I still thought it better to cancel for today and go another day "just in case". Besides, going out with Calamine lotion all over one's face is just not a good look!

Speaking of looking, I hope you liked the way those last two balloon animals looked! Jamie said that the green one was a deer and the purple one was a rabbit. She had a good time making the balloon animals but the yard sale itself wasn't much of a success as they only made about $10. I guess it just goes to show how badly our economy is doing when you can't even clear $20 at a yard sale. It hardly makes it worth the effort.

Finally, speaking of making efforts - we are having a potluck at work tomorrow to celebrate my supervisor's birthday and I have to make potato salad and cornbread to bring in as my contributions. I've got this great recipe for cornbread that you all might want to make an effort to try as, trust me, it's delicious!

Now if you'll excuse me, I'll be in the kitchen for awhile trying to remember how to cook! Hope everyone has a great Tuesday, let me know if you try the cornbread!
Posted by Linda at 4/21/2009