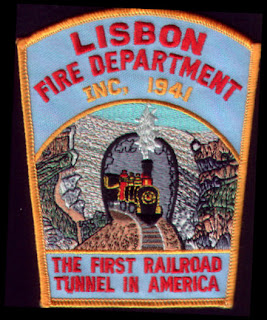 Even though Spring has been taking its own sweet time arriving here in Connecticut, last Thursday was an exceptionally nice day. Luckily for me, it also happened to be a day off for me and even though I had plans to finish painting the kitchen, it was just too pretty outside to be inside so the painting plans were scrapped and I went in search of some history instead.

Thursday's plans included lunch with my friend Rhonda in the small town of Lisbon, which lies just north of Norwich, and which I drive through on a regular basis to get to my mom's house in Canterbury. It's also the town that lays claim to the "first railroad tunnel in America" - as proudly displayed on their Volunteer Fire Department patches as well as on the side of their ambulance. 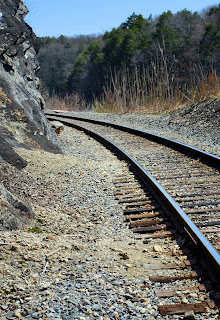 Not knowing exactly where in Lisbon this piece of history might be, I stopped in at the Town Hall after lunch and asked. It seemed the smarter thing to do rather than walk miles and miles of railroad tracks - especially considering there are several different train lines that run through Lisbon. The kindly Town Clerk pointed me in the right direction (which made perfect sense once she told me!) and off I went.

As I had suspected, the railroad tunnel is located beneath Tunnel Hill (like I said, it made perfect sense!) but you can't get there from Tunnel Hill Road (I had tried that already and there was no tunnel there to be found). Instead, you have to park along Route 12 shortly after you cross over the bridge heading north out of Norwich and then walk into the woods a little ways. 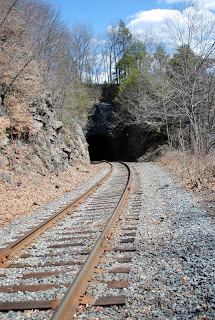 It's not a bad walk as there's a pretty good path that looks like it may double as a road from time to time. My only hesitancy was in the big sign that read "State Property - No Trespassing" but I figured that if it were off-limits, the kindly Town Clerk would have told me so rather than sending me off to get arrested! At least that was going to be my defense if a couple of State Troopers happened by!

After a short hike through the woods I came upon the Quinebaug River and the railroad tracks that run along it, took a left, and followed them a short ways around a curve where the tunnel awaited me in all of its tunnel-like glory. Yeah, yeah ... I'm sure there's really no such thing as "tunnel-like glory" but bear with me, it sounds good! 300 feet long by 23 feet wide by 18 feet high, the tunnel was carved out by hand using picks and shovels which is evident when you look at the walls and ceiling - which drips a lot of water. The tunnel is very cool but kinda creepy when you're in there walking around by yourself and wondering if a train might be coming through at some point in time! If a train did, there would certainly be room to flatten oneself against the wall but I can only imagine that it would be horribly noisy as well as quite scary if that happened. This picture shows the view from inside the tunnel looking back towards the way I came in. I didn't walk all the way through as the further end of the tunnel had quite a bit of standing water and I didn't have the right footwear to walk through mud and muck - plus I figured with my luck a train would come through while I was halfway through! The thought occurred to me that perhaps it would be a good idea to come back out to the tunnel another time and perhaps bring Amanda with me as she might find it to be kind of cool, too. Hopefully by then the other end of the tunnel will have dried up a bit and we could walk it all the way through to take pictures on the other side.

As I started walking back the way I came, I noticed two men heading down the tracks in my direction and as they didn't look like State Troopers coming to arrest me for trespassing, I found myself getting just a tiny bit nervous as I was obviously out in the semi-middle of nowhere with no one knowing where I was. Most times I'm either too naive or too stupid to think about being out in places alone but for just a moment or two I started thinking about that - darn all the crime that has been sprouting up all over the place these days! 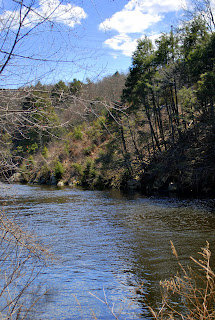 Before I had time to work myself into a good bit of nerves, though, I noticed that one of the men was also carrying a camera and as I got closer the man in the lead asked if the tunnel was much further up the tracks. Whew! "Nope, just around that corner," I told him. We then discussed the possibility of a train coming through which I thought would be cool and would add to the photos but which they thought would be too close for comfort. I guess I can see their point, trains are pretty big - especially when you're standing right by the side of the tracks.

I'd definitely like to do some more exploring out there but next time I'll take at least Amanda with me so I'm not out wandering in the woods by the river by myself. Maybe with any luck I can get her a little interested in local history, too.