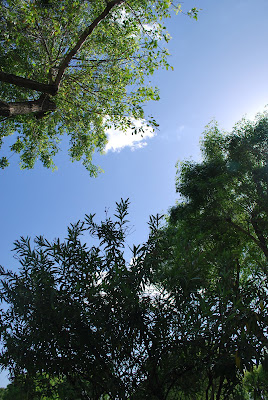 The sun finally decided to shine here in California on Tuesday and with Cyndi still under the weather with her very own case of the flu, I was more or less left to my own devices. Experience has taught me that when left to my own devices, I generally tend to go out and spend some time with my Nikon and yesterday was no exception to that.

After getting together for lunch with my old roommate Scott who is an award-winning (I just love being able to say that about him!) sports reporter for The Stockton Record, which is the local newspaper, and having a wonderful time catching up on new things and laughing over old ones I drove over to the Stockton Rural Cemetery to do something I do every time I'm here - visit the grave of Sgt. Timothy White.

Timmy was one of the police officers I used to work with at the Stockton Police Department who was tragically killed in the line of duty in January of 1990. I wasn't living in Stockton when Timmy died but his memory has stayed with me all of these years and a trip to Stockton would not be complete without a stop by his grave. He wasn't just a great cop, he was a friend to me during a time when I really needed one and I will never forget him. Some of you are probably aware of the fact that I enjoy taking pictures in cemeteries around Connecticut and Stockton is apparently no exception as I was compelled to head back to the car and pull my camera out yesterday after trying to find a small stone to place on top of Timmy's grave. The leaving of a stone is an act of remembrance to show that the person whose grave it is has not been forgotten but unfortunately, there were no small stones to be found anywhere around so I hope Timmy doesn't mind I left a rather large rock on his grave! Hopefully it's the thought that counts! The trees in the Stockton Rural Cemetery always captivate me and yesterday was certainly no exception - especially with the beautiful blue skies above - so after leaving Timmy's grave, I took some pictures that would probably be perfect for Tisha's Looking at the Sky on Friday meme! Not to worry, I have plenty more in store for that not just from here but from 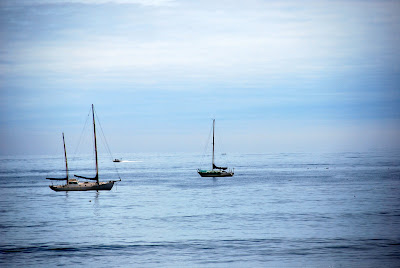 my time in Santa Cruz with Katherine. As a matter of fact, I've got about 450 pictures from my time spent down there and as soon as I get them sorted out, you can expect an epic Santa Cruz post! Just as a tease, here's a picture for ya that I'm sure Sandee will like!

Following my time at the cemetery I went by and spent the rest of the afternoon and some of the evening visiting Grandma Edith, my former grandmother-in-law from my first marriage who still tells everyone that I'm her granddaughter. She turned 86 in March and even though she's doing okay, I definitely worry about her living alone as she is starting to get very, very forgetful. She asked me the same questions probably about six times over while I was there and each time it was like the answer was brand new to her. She's a true sweetheart and has always made me feel like one of her own rather than the woman who used to be married to her grandson. Considering my own grandparents are long gone, she's the only one I've got left now and she's very dear to my heart.

From Grandma Edith's, I decided to take a drive around Stockton to revisit some old haunts and see if I still knew where things are. The city has grown by leaps and bounds since I left in 1987 and I've only gotten back here a handful of times since then but I'm rather proud of the fact that I still remember where most things are. Must be from my former dispatching days when I knew just about every single street and neighborhood in Stockton. I pulled over at one point to take some pictures of some beautiful roses that caught my eye; their color was just gorgeous and even though these pictures don't really do them justice I figured I would share them anyway! Just across the street from where I was taking the pictures of the roses, I saw this scene that I rather liked ... Yet behind me, this is what the sky looked like ... Even though the moon looks like it was extremely far away in that picture, it really wasn't and because of that I was finally able to capture a shot of the moon that I really like - Woohoo! I almost did a happy dance I was so pleased with that picture!

All in all, in spite of that fact that I haven't been able to spend any time with Cyndi, it's been a nice trip though I am really hoping we can do something together today. If not, it seems to me she's going to have to come to the East Coast to make it up to me! Sounds fair, right??
Posted by Linda at 5/06/2009