But Not as Scary as a Red Sox Fan in Yankee Stadium, I Bet!

This isn't one of my best shots from out in Las Vegas but out of the 261 pictures that I took, I thought it was actually pretty funny ... 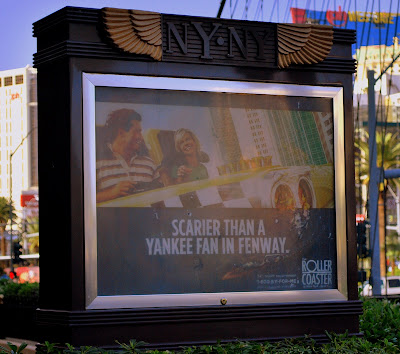 The sign is referring to the rollercoaster that sits atop the New York New York casino that I guess is supposed to look like a Manhattan taxi cab or something. I didn't go on it as I had read that it was a pretty rough ride and, as much as I love rollercoasters, I didn't want to take a chance on screwing up my back while over 2,000 miles away from home.

Jen did fork over $14 to ride the thing and I believe what she found scariest about the whole experience was the price! She told me that it was the worst rollercoaster ride she had ever been on and she felt somewhat "beat up" afterward. As a matter of fact, the next day she had very sore spots on her shoulders where the restraint bar came down. I'm quite glad I missed that one, thank you very much!

Anyhow, I thought maybe some of the Red Sox fans that read my blog might get a kick out of it - or if there are any Yankee fans out there I'm sure they'd appreciate it, too! For those unfamiliar with the New York Yankee - Boston Red Sox rivalry all I can say is - where have you been hiding??