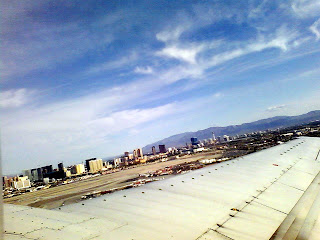 It's still kind of hard to believe that just about one year to the date that I was last in California, I am back here again. I honestly figured I wouldn't see the place again for years - if ever - but I was quite obviously wrong.

The flight from Las Vegas was quite nice as there were only about 35 of us on the plane so I not only had my own row but all of the rows around me were empty, too. Compared to the packed-to-the-gills flight that Jen and I had from Providence to Vegas, the flight to Sacramento was fantastic! Plus it was a lot shorter, too! 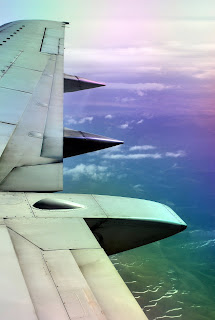 I really can't complain about Southwest Airlines at all - in spite of the packed plane on Tuesday. So far, all of their flights have been right on time or early and the crews have been wonderful. Sadly, flying isn't what it used to be (I actually have fond memories of some of my first flights when they actually gave you real silverware and an honest-to-goodness meal) but I don't mind it every once in awhile. Besides, you can't get cool pictures of the clouds and wings of airplanes if you're on the ground all the time!

Anyhow ... we landed in Sacramento about ten minutes early and I stepped out of the airport into rain. Yep, it is raining here in sunny California and may not actually clear up until the day I leave. Bummer. Oh well, they need the rain out here so I guess I can't begrude them the moisture - though it could have waited till after I left!

First stop after getting my fancy-dancy brand-new hybrid Toyota Camry rental car with all the bells and whistles for a dirt cheap price (gots to love Price-Line!), I made my way down to an iHop not too far from the airport to meet up with Carol of A Letter to Me ... Carol's blog was introduced to me by Jamie of Duward Discussion and she is a truly delightful lady who originally hails from Massachusetts but has called Sacramento home for quite some time now. After a big hug in the parking lot we sat down to a lovely late breakfast and chat and I've got to say that Carol is just as lovely in person as she is on her blog. Before I knew it 2-1/2 hours had flown by and yes, idiot that I am, I left my camera in the car and neglected to get a picture. After another big hug, I continued my journey south to Stockton and pulled up outside Cyndi's house right around 3:00.

Left to my own devices while Cyndi and her husband left for their Saturday night visit to see her youngest son in his group home, I finally was able to get on-line and clean out my email folders as well as download some pictures which I am still in the process of sorting out.

When hunger finally kicked in again I decided to hold off on any sort of Mexican food until Cyndi could join me and opted to finally check out the fast-food joint that people have been telling me I need to go to now for years - In-N-Out Burger. The last time I was here in Stockton I was going to give them a try but the 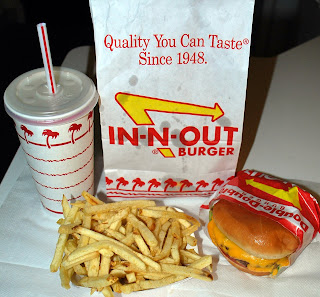 line at the drive-thru was wrapped around the building and I went to Jack in the Box instead. This time I bypassed the long drive-thru line, parked the car, and went inside to order.

Having never been to an In-N-Out, I had no idea what to expect. The menu is pretty basic - a hamburger, a cheeseburger, or a double-double burger; fries; shakes; and sodas. I believe that about sums the whole thing up! I was pretty hungry so opted for a double-double (no onions, please), an order of fries, and a beverage. As I waited for my order to be ready, I wondered whether it was going to be as good as all the hype I'd heard.

First off, let me just say that the fries were phenomenal! They're made from potatoes fresh-cut right there on the premises (you can see them slicing them as you wait for your food to be served) and are probably the lightest fries I've ever tasted! As for the burger - it was definitely just as good as everyone kept telling me and reminded me of the hamburgers that we used to get when I was younger and burgers tasted like real burgers and not some prefabricated mystery meat smothered in secret sauce. Of course, now I get to go back to Connecticut and wish we had not only Jack in the Box restaurants but In-N-Outs, too!

Now that I've got a full stomach, it's time to call it a night as 5:00 a.m. was a long, long time ago and I need to be up at a reasonable hour to get ready to head to the coast - rain or no rain! I'm hoping it's a Central Valley thing and the sun might actually shine in Santa Cruz but even if it doesn't, I'm looking forward to seeing the ocean and Katherine both. Let the real part of the vacation begin!
Posted by Linda at 5/03/2009

Email ThisBlogThis!Share to TwitterShare to FacebookShare to Pinterest
Labels: California