'A' is for Amanda Who Finally Started Her Own Blog 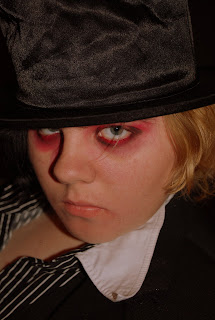 I bet you all are expecting another post from California, aren't you? Surprise! Not today!

It is my pleasure to announce that, after my suggesting it to her a time or two, Amanda finally broke down and decided to start her own blog or - as she put it in her first post -

"Now, why would I even want to make my own blog?! I am NOT a writer, not by a long shot. I did not inherit that particular talent from my mom.
She seems to think that if I made my own blog, I could post my artwork over here instead of bugging her every so often to do a post on her own blog (Even though it IS supposed to be about both of us. Heh.)"

She's got three posts up so far and I'm going to have to disagree with her in that I think she is, in fact, a bit of a writer. Granted, she's not as long-winded as I am but she writes a pretty good post!

Amanda's blog is titled Artcetera "The Delirious Ramblings of an Artistically Inclined Mind" and it will hopefully serve as a forum for her to get some feedback on her artwork that she plans on primarily using the blog for. Contrary to what she might think, I do like to post her artwork on my blog but I thought it might be nice for her to be able to post it more frequently and get some input directly. Her goal in life is to be a comic book illustrator/artist and I think that having a blog and posting some of her work there can only help her in attaining that goal. After all, it's my goal in life that she become a very successful comic book illustrator/artist so that she can then support me and I can stop working like a fiend and slaving over 9-1-1 calls!

I would consider it a personal favor to me if you'd consider adding her blog to your Readers and maybe stop by every so often and offer up a comment or two - be it good or bad. As good as I think her artwork is I'm obviously a bit prejudiced so it would be nice to hear from another viewer or two - plus maybe you folks can convince her that she is a pretty decent writer no matter what she may think!

Thank you much and I'll get back to my West Coast posts once I get back to the East Coast (I'm flying home today) and can get back into a semi-normal routine - whatever and whenever that may be!