This past Friday I had occasion to be up in my hometown of Canterbury and after finding my mother not at home, I decided to stop by the cemetery where my father is buried and see how things looked for the upcoming Memorial Day weekend. 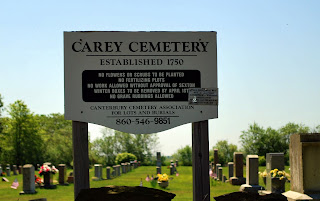 Carey Cemetery, established in 1750, has been the "family cemetery" for as long as I can remember and was strategically located between my grandfather's house and my Aunt Eleanor's house. If one were to walk from one house to the other, you had to go right past Carey Cemetery wherein was buried my mother's mother who died the year I was born, my mother's oldest brother who came home with strep throat one day and was dead the next at age 9, as well as other relatives that I had never met. 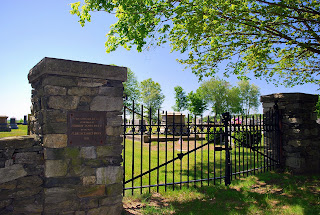 In later years Carey also became the final resting place of my beloved grandfather, two more uncles who died way too young, and other relatives and family friends. In 2003, it also became the last stop for my father when he succumbed to the non-Hodgkins' lymphoma that he had contracted as a result of exposure to Agent Orange during his tour in Danang, Vietnam in 1967-1968. My Dad's grave is through those gates pictured above and nearby are the graves of five other veterans; it makes me think my Dad is in good company.

After spending some time at my Dad's grave, I decided to take a walk through the rest of the cemetery and check out the graves of the other veterans whose brand-new flags flapped in the breeze and marked the spots where their physical remains reposed. At Carey Cemetery there are veterans from the Revolutionary War to the Vietnam War as well as seven wars in between and as I stopped at each grave, I thanked each person for their service to our country and their role in keeping our country free. 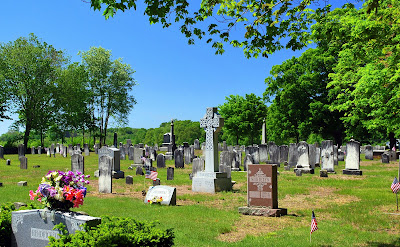 As I walked amongst the gravestones, I noticed that the majority of the veterans are from the Civil War era which somehow seems appropriate being that Memorial Day originated from the observance of a national Decoration Day to honor those who had died in that war. The first official Decoration Day was held on May 30th, 1868 as proclaimed by General John Alexander Logan, National Commander of the Grand Army of the Republic (a fraternal organization composed of veterans of the Union Army who had served in the American Civil War). If you're interested in reading more about how Memorial Day came about, I did a post last year that explains it in more detail.

It appears that the small town of Canterbury (with a population of approximately 1,700 in the 1860's) sent more than its fair share of men to fight in the War of Northern Aggression (as Miss Bee likes to call it). Even if you didn't know the number of men who died fighting to keep the Union as one - best estimates put the total deaths at 620,000 - you would know that it was a large amount just by the number of graves belonging to Civil War soldiers in Carey Cemetery.

Of the Civil War veterans, there are five graves of soldiers who died on September 17th, 1862 at the Battle of Antietam near Sharpsburg, Maryland. Antietam was the first major battle to be fought on Northern soil and, with approximately 23,000 causalities, it was the bloodiest single-day battle in American history. More Americans died on September 17th, 1862 than on any other day in our nation's military history; five of whom lie beneath the soil of Carey Cemetery.

Naturally I had my camera with me so I decided that as a tribute to the veterans whose graves I visited while walking through Carey Cemetery, I would take a picture of their grave markers and then put them all in a slideshow to honor their service to our country. It seemed like the least I could do for all that they had done for myself and all other Americans who enjoy the freedoms that we so often take for granted.


If you haven't done so yet, please remember to thank a veteran for his or her service to our country. Memorial Day is set aside to remember those veterans who died but wouldn't it be nice to acknowledge them while they're still alive and can hear your thanks? I'd like to think so!
Posted by Linda at 5/25/2009