I've been wondering about something lately that has me rather perplexed ... how can Dunkin' Donuts claim that America runs on Dunkin' when they don't even have stores in all of the states of America?

Is not North Dakota part of America? Is not Utah part of America? Is not Arkansas part of America? None of these states have a Dunkin' Donuts franchise and neither do a bunch of others. As a matter of fact, there is not a single one in all of California or Washington or Idaho or Montana or even Minnesota - all states that probably drink plenty of coffee but not any that they can get from the place that claims to have the coffee that America runs on.

How can this be truth in advertising? How you can a company lay claim to providing the coffee that America runs on when a good number of Americans have no way of obtaining it? Granted, there are more than 5,200 Dunkin' Donuts restaurants located in 36 states but unless my math is wrong, that leaves 14 states that cannot possibly run on Dunkin'!

Perhaps the ad execs are hoping that by proclaiming America runs on Dunkin' that eventually there will be Dunkin' Donuts franchises from sea to shining sea and that they will wipe out the competition from places like Starbucks, Steamin' Joes, Caribou Coffee, Tim Horton's, Coffee Time, Gloria Jean's, Krispy Kreme, Chock Full o' Nuts, and my personal favorite - Bad Ass Coffee - the coffee with an attitude!** Unfortunately we have none of those here in Connecticut but if we did you can damn well bet I'd be buying my morning cup of joe from those guys as I'm sure a cup of their coffee would definitely have you up and running rather than wondering if you'd ordered a decaf by mistake! 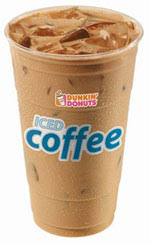 Now don't get me wrong, I do enjoy an occasional coffee from D&D - especially a nice big iced coffee in the warmer months - but the number of them that have popped up around here lately is quite alarming. Here in Norwich we have at least six or seven Dunks (more if you want to count the ones located in WalMart and Stop & Shop) and not much of anything else in the area except for a lone Tim Horton's sandwiched in between two D&Ds on the west side of town or fast-food coffee in the form of McDonald's or Burger King (blech). 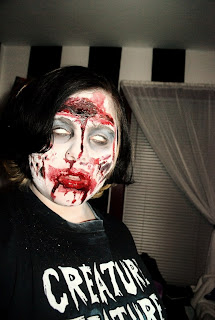 Frankly I don't think it's accurate to say that America runs on Dunkin' but I can sure say that Dunkin' is running everything else out of town - least ways here in Norwich!

It's just too bad Amanda can't get a job at any of them but I get the feeling they're probably not hiring zombies ... though Amanda tells me that zombies run on Dunkin' when they can't get any fresh blood! Kid kinda looks like she needs some coffee, doesn't she??

**This is in no way an advertisement for Bad Ass Coffee - I just think the name is cool and I'd definitely go there if we had one around so if people asked me what I was drinking I could say it was a Bad Ass cup of coffee! Yeah, yeah, I know, I can be so juvenile sometimes!
Posted by Linda at 5/27/2009