The Vacation is Definitely Over

Yep, sad to say that when vacation is over - vacation is over. It was back to work for me yesterday afternoon and after being gone for almost two weeks, I sort of felt like a stranger in a strange land for the first ten minutes or so. Of course it all came back to me after just a short period of time but that first 911 call was a bit awkward at first! Not to sound like a heartless dispatcher but I gotta tell you, it's real easy not to miss other people's emergencies.

As for my trip home Thursday via Sacramento back to Vegas and then to Providence - even though both flights were packed and on the last leg I was crammed into a middle seat between two people who obviously knew each other but didn't mind having a stranger sitting smack in the middle of their conversation - it wasn't too bad because a scheduled 5-hour flight ended up being just a shade under 4-1/2 hours due to a good tail wind. I am still very impressed by Southwest's on-time, or better yet early, record!

In an effort to make the second flight go by a little quicker I decided to spring for a glass of Chardonnay in the hopes that perhaps it would put me to sleep for a little while. I figured it would be worth the five bucks to get a little shut-eye but I've got to say, that was probably the worst plastic cup of Chardonnay I have ever had in my life. Come to think of it, it may have been the only plastic cup of Chardonnay I've ever had in my life! I did nod off for about an hour so I guess it was worth choking it down but next time I think I'll order some cranberry juice and vodka as that's what the guy next to me had and he seemed to sleep almost the entire trip once he finished his drink and his conversation with his friend to my right. Of course, he had two drinks to my one so maybe that's part of the secret!

Upon arriving home I wasn't too dismayed by the state of the house as Amanda had done a reasonable job of keeping it about as clean as she usually does (not exactly to my standards but not too bad). I did, however, find a nice moldy batch of what used to be corn muffins sitting in a covered bowl on the counter. Apparently Amanda had completely forgotten that there were corn muffins in the bowl and never once opened it the entire time I was gone. When I opened the lid, this is what I saw ... 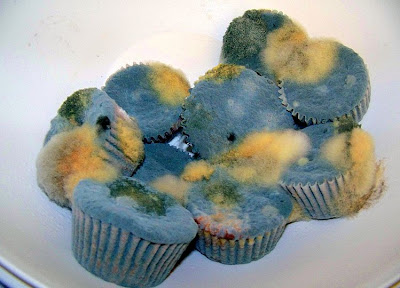 As you can see, they turned a lovely shade of blue & green and grew some nice fur, too. I bet they could have garnered some kid an A+ in a science project or provided penicillin for a third world country! For a kid who likes zombies and other monsters, Amanda got kind of squeamish when I had her look in the bowl and there was no way she was going to take them out to the trash so I ended up having to do it myself but I guess if that was the worst of it, I'm okay with that. 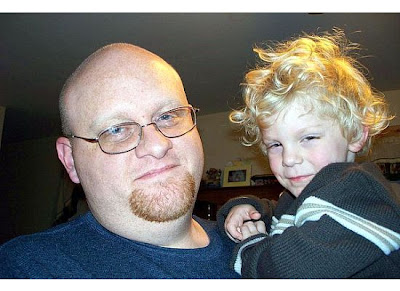 Happy Birthday, Michael, hope it's a good one for you with a great year to follow! And speaking of birthdays, it's my curly-headed grandson's fourth birthday next month. Where does the time go??

Oh well, speaking of time, it's back to work for another 8 hours - like I said, when vacation ends, it really ends! Hope everyone has a great Saturday!
Posted by Linda at 5/09/2009