Thanks to my friend Callie Ann in Oregon, I can now say that I have sold not just one but three of photographs! Granted, it's three prints of the same photograph but even so - woohoo! 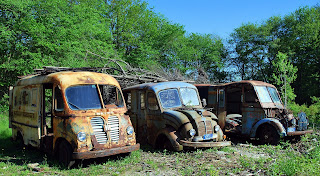 Awhile back Callie Ann left a comment on the post I did about the old Broad Brook Dairy - Rusted Remains of Days Gone By in Preston - stating that she would like to buy a copy of the picture that I took of three rusted milk trucks as she thought the picture would like great on her grandson Jack Pepper's bedroom wall. I told her that I would be happy to have a copy made and sent to her and all she had to pay for was the cost of the copy and the shipping and handling.

Recently - thanks to Star - I found a great place for prints that uses this really cool metallic paper that makes pictures really pop and their prices are beyond reasonable. This isn't a paid post or anything like that but I can't say enough good things about iPrintfromHome.com and their service, their quality, or their prices and that's where I wanted to have Callie's print shipped from. Before I could place the order, though, she told me she wanted three 8x10's of the picture so that she could also give one to her grandfather who used to be a milkman and would appreciate the rusted relics in the photo.

I told her that the prints would cost $2.40 a piece and that shipping and handling for the whole order was going to be $3.00 but, because she's a sweetheart, Callie sent me a bit more than that via PayPal so I guess that I can now officially say that I have sold some of my photography and even made a profit on it! I sure hope that her grandfather and Jack Pepper like their pictures - I have no idea what Callie plans on doing with that third one. 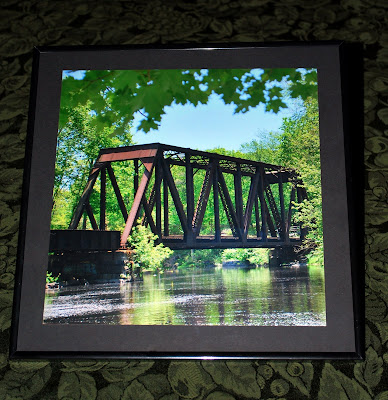 While on the subject of my pictures, another friend from work who also happens to be a blogger, Rob, had a birthday last week and I gave him a framed 10x10 shot of a picture I took of the railroad trestle over the Yantic River. I had the square print made at iPrintFromHome.com and thought it added a unique perspective to the shot while the metallic paper almost give it a 3-D look. All in all, I was quite pleased with it.

Rob has been crossing a lot of bridges lately in his life - including his 21st birthday - so it seemed kind of appropriate to give him a bridge of his own to perhaps not cross but simply look at. He told me it looks great on the living room wall of his new home so after Callie gets her prints and hangs them up, I'll have stuff on the walls of three other homes other than my own! Well, actually four if you count the picture of the historic Green School in Canterbury I gave to my cousin (who is the President of the Historical Society in Canterbury) for her birthday. Hmm, I wonder if this qualifies me as a real photographer now??

Too bad I couldn't figure out how to make a good profit selling pictures; I'd much rather spend my spare time behind the lens of my Nikon than behind the microphone at the dispatch console but alas, I shall not be quitting my day job anytime soon! Besides, my crews would miss me - I hope!
Posted by Linda at 6/10/2009