At long last - one month to the day since I was there - I have finally managed to get the pictures of my second day in Santa Cruz into some sort of order and I can finally write the blog post I've wanted to write since I got back. There are lots of pictures so I put a good majority of them into collage form to save a little bit of space and scrolling on your part! Should you like to see a bigger version of any of the pictures, I believe that if you click on them you will be redirected to a larger size - or at least that's how it's supposed to work in theory! Because there are so many pictures, I'll try to keep the text short but you know me ... have fingers, will type!

Monday, May the 4th, dawned a little brighter in Santa Cruz than the Sunday before and it looked like California might at last be shedding the rain that had greeted me upon my arrival in Sacramento two days before. Even though the skies were still more gray than blue at least it didn't look like we were going to need an umbrella. After rousting myself out of the extreme comfort of my bed at the very quaint Inn at Pasatiempo, located at the foot of the Santa Cruz mountains, I finally got my act together around mid-morning and drove down to meet Katherine at her home in Santa Cruz.

There were a couple places that I really wanted to see while in Santa Cruz and one of the first was the Santa Cruz Mission which is just one in the chain of 21 missions along California's El Camino Real ("The Royal Highway") from San Francisco to San Diego. The missions represent the first arrival of non-Native Americans to California and the Mission Santa Cruz was the 12th of the 21 to be built. Founded on August 28th, 1791 by Father Fermin Lasuen the mission was named for the sacred cross. Unfortunately the Mission Santa Cruz had a rather turbulent history including the murder of one of its padres which in turn led to one of the very first autopsies to be performed in California. The original church was eventually destroyed by two earthquakes in 1840 and 1857. At the time of the mission's secularization in 1834, the complex contained 32 buildings; in the center of what was once that complex now stands Plaza Park. In 1931 a small replica of the original mission church, whose bell is pictured above, was built near the original site. In 1889, on the site where Santa Cruz Mission once stood, the town built the Holy Cross Catholic Church for their use. The beautiful granite arch in front of the church was erected to commemorate the 100th birthday of Mission Santa Cruz in 1891. Following our visit to Mission Santa Cruz and the Holy Cross Church, Katherine and I drove down towards the water and the Santa Cruz boardwalk - a place I had been to only once before when I lived in California. There were a couple of things I remembered from that previous trip: one was the frozen chocolate-covered bananas (yum!) and the other was the Giant Dipper, Santa Cruz's wooden rollercoaster that has been making people of all ages scream for the past 85 years. Luckily for us, the boardwalk was partially open with a few of the rides running - one of them being the Giant Dipper itself. Katherine asked if I was up for a ride and after debating the pros and cons of going on a rollercoaster with a back that could conceivably go out if I coughed wrong I decided to throw caution to the wind and climb on for a trip around the tracks. As you can see, there was no need to wait in line which made the ride that much more enjoyable. Katherine and I took our seats in the back (you get better air-time in the back!) and the ride was just as much fun as I remembered it to be from all those years ago. There's just something about the smell of a wooden rollercoaster that makes it that much more thrilling and as we flew over the hills and dips, my back didn't hurt a bit and I was glad I had taken the chance and gone for the ride. Further down the boardwalk is a candy shoppe that would have had any kid - or adult for that matter! - drooling over the display of confectionery goodies. While we were there I could have gotten one of those frozen chocolate-covered bananas that I remembered so well but for some unknown reason I didn't. Maybe I figure it gives me a good reason to go back sometime! After we had walked the length of the boardwalk and enjoyed our rollercoaster ride, Katherine then took me over to the Santa Cruz Pier - which you could walk to from the boardwalk if one was feeling adventurous ... we weren't! There are a number of shops and restaurants located out on the pier and whereas the boardwalk offered sweets, the pier offered up a different sort of delicacy - fresh seafood! I'm sure the guy behind the counter thought I was nuts as I took pictures of fish on beds of ice but I thought it all looked pretty cool even if I'm not much of a seafood eater. The pier also gave me a chance to photograph some of the native wildlife including large starfish that wrapped themselves around the pilings beneath the pier and a few of the many sea lions that climbed up on the boards below the pier to take naps or snarl at curious photographers! Katherine assured me that they were less than friendly creatures as she flapped her arms together like fins and did a pretty good imitation of a sea lion bark! That may have been about the time the guy in the picture above gave me the evil eye! Another person walking along the pier with friends offered to take a picture of Katherine and I together so we said sure. After all, we were both probably feeling pretty comfortable hiding behind our sunglasses - at least I know that I was! Besides, in this shot you can see what a lovely looking lady Katherine truly is. Only problem is, you can't see how very nice she is on the inside! Even though it was still somewhat hazy, I really like all of these pictures that I took of the water off of the Santa Cruz beach. Those things that look like mountains in the background are actually the hills of Monterey on the other side of the bay. The California coastline makes a lot of twisty turns and that's one of them right there. For some reason I always seem to forget that Santa Cruz is actually north of Monterey but that could be because I'm a little rusty on my California geography. Katherine, who is a pilot, tells me when I come back out to visit that she'll take me on a flight in a small plane up the coastline which is a great incentive to go back again as I can only imagine how cool that would be!

After one more picture of Steamer Lane from the pier, we climbed back into the car and drove over to the marina where we could walk out to the other of Santa Cruz's lighthouses 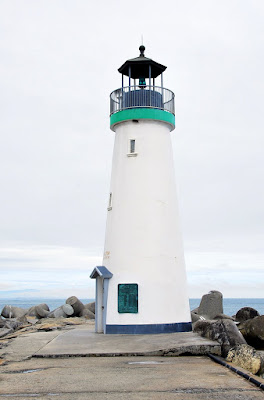 - the Walton Lighthouse or Santa Cruz Harbor Light as it's alternately known.

This relatively new lighthouse which was built in 2001 was dedicated on June 9th, 2002 and named in honor of Derek Walton, brother of Charles Watson of Los Gatos who gave a major donation when fundraising was going on for the new harbor light. Derek, who had passed away, was a former merchant marine and no doubt would have been delighted (no pun intended) to have a lighthouse named in his honor.

A plaque on the door of the lighthouse reads "for the people and mariners of Santa Cruz". Through the door sits a circular staircase of 42 steps at the top of which is a fifth order Fresnel lens that flashes a green light every four seconds 54 feet above sea level. Unfortunately you can't climb the tower but have to be content to walk around the breakwater on which the lighthouse sits. Speaking of the breakwater ... 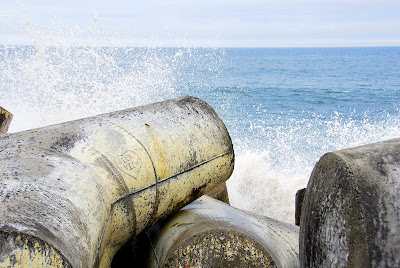 I found the odd shaped cement breakers rather fascinating as each one seemed to have a number on it (though not all could lame claim to having graffiti - thank goodness!). I asked Katherine if she knew why they were numbered but she wasn't really sure and I haven't been at all successful in finding out why via an internet search. Anyone know or want to hazard a guess? ... does anyone know what kind of bird this is? Katherine and I saw a lot of them - an awful lot of them! - not only in Santa Cruz near the harbor but near the old cement World War I supply ship the Palo Alto in Aptos. As a matter of fact, it seemed like a lot of them had made the Palo Alto their home. They were kind of odd looking, to say the least! 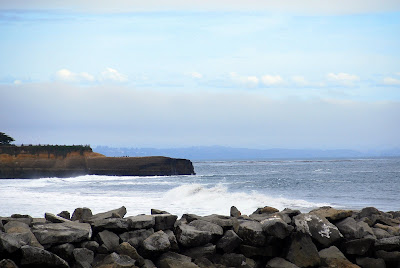 Before we hit the highway to make our way back over to Stockton for our dinner with Sandee and Zane we made a few other stops in Santa Cruz but there is still a lot there I'd like to see one of these days - including maybe a gorgeous sunset or two that the weather deprived me of this last time! Not that I'm complaining as the whole trip really was wonderful and I am so glad that I made the drive over the Santa Cruz mountains in less-than-ideal California weather to spend a few days exploring Katherine's lovely community. I've often said that if I could live anywhere I'd pick Lake Tahoe but I'm beginning to think I need to make that Tahoe in the summer and Santa Cruz in the winter. What a great place that I now have some great memories of!

Thank you again, Katherine, for being my tour guide and chauffeur - I enjoyed every single minute of it and really do hope to get back out there someday soon! After all I need to get one of those frozen chocolate-covered bananas, take an airplane ride, eat at the Shadowbrook and go on that neat looking tram, take some pictures of the sunset, ride on the Giant Dipper again, ... !!
Posted by Linda at 6/04/2009