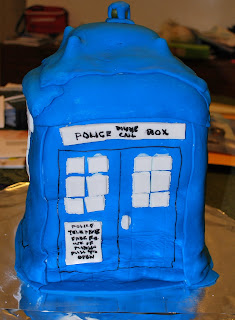 "So Linda .. what did you do on your day off Thursday?"

"A time machine - Time and Relative Dimension in Space to be exact."

"Okay ... and exactly just why did you build a, what do you call it, Tardis?"

"Amanda really wanted one for her birthday."

"Well, a birthday cake that looked like one at any rate!"

Yeah, I'm thinking that's probably about how that conversation would go were I to actually have it!

For those unfamiliar with the British Sci-Fi television series that has been around almost longer than I have, Doctor Who features a guy (the doctor) who travels through time in the Tardis getting into all sorts of adventures with his sonic screwdriver and trusty sidekick. The show has become one of Amanda's very favorites and one of her requests for her birthday this year was a Tardis cake.

To be honest, I originally wasn't going to do it as I figured I had absolutely no talent when it came to cake-making - especially one that was supposed to look like a blue police call box! I had hoped that Mags would be able to come down from Boston and bail me out (excellent baker that she is) but alas, she had plans and couldn't make it. I then kicked around the idea of getting a digital picture put on a sheet cake at the local grocery store but in the end, after checking every internet source possible, I decided I'd take on the challenge and hope for the best. 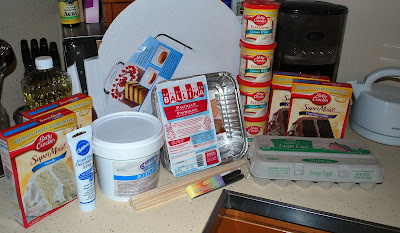 I decided I was ready but Thursday morning found me running out to the store for a couple more cans of frosting "just in case" as it had dawned on me late the night before that perhaps I wouldn't have enough. I had been lucky enough to find blue fondant online and a few other things I needed which was good because I had never ever worked with fondant in my life and I was a bit intimidated by the whole idea. The stuff is tricky to say the least!

On Tuesday I baked four 8x8 chocolate cakes and another four 8x8 vanilla cakes so that they'd be ready for Thursday's cake-a-thon which commenced around noon. Of course pictures were taken throughout the process and put together in this really quick one-minute video set to the theme music from Doctor Who for your viewing pleasure -


Ah, if only I could have made the cake that quickly but instead it took me about four hours all told.

It wasn't perfect by any stretch of the imagination and I'm not sure how well it's going to look at the party this evening as once it comes out of the refrigerator it will probably be even more wibbly-wobbly and timey-whimey than it already is (I'm pretty sure I know what things I did wrong and should I ever take on this sort of project again will attempt to learn from those mistakes). The bottom line though is that Amanda seemed to love it and that smile was more than worth it! 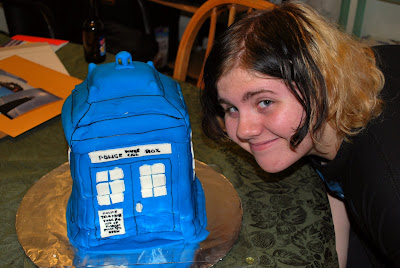 Now here's hoping Jamie wants something "normal" for her 16th birthday next month!
Posted by Linda at 6/19/2009