You Scream, I Scream, We All Scream for Ice Cream! 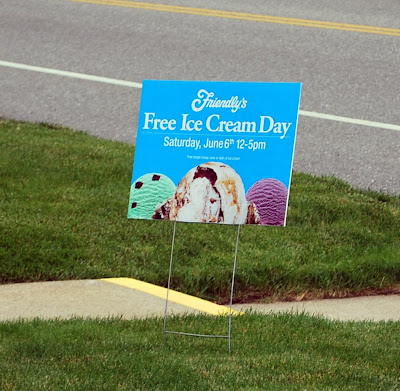 Someone once said that the best things in life are free and even though I doubt they were actually talking about ice cream, that was the case yesterday when Friendly's hosted their second annual Free Ice Cream Day. Did someone say free? Did someone say ice cream? Well, you can bet I was all over that like a hobo on a ham sandwich!

In a time when the economy is hurting more people than it's helping, some of you might be wondering why Friendly's gave away free ice cream to as many people as possible (last year they gave away over 300,000 cups and cones). The reason was summed up by Friendly’s chief executive Ned R. Lidvall in a statement that read:

“We want to give away as much ice cream as possible. After a winter that was grueling – both because of the economy and because of the weather – people deserve a cool, delicious treat to kick off the summer.”

That certainly worked for me so after I got out of work I piled Amanda and Jamie in the car and made the short drive over to our local Friendly's (there are two of them in Norwich). There was a line but it wasn't too bad and the day was still nice so it was worth the short wait for three free ice cream cones (with sprinkles) which were guaranteed to make everyone happy from men in kilts to teenagers that you have to coax a smile out of! Thank you, Mr. Lidvall, and all the friendly people at our local Friendly's! You rock!
Posted by Linda at 6/07/2009

Email ThisBlogThis!Share to TwitterShare to FacebookShare to Pinterest
Labels: fun