Today's daydream is brought to you by one of the most famous ocean liners in the world - the Queen Mary 2. 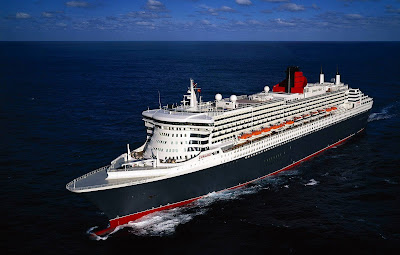 Sometimes I allow myself to have these silly little daydreams of things that I would like to do in life and yesterday I was thinking that one of the things I would really, really, really like to do is visit England and then come back to America in style via a TransAtlantic cruise. Doesn't that sound lovely?

Now granted, there are a lot of other cruise lines and ships that traverse the Atlantic but I was thinking that if one was going to do that sort of thing, it should done in style and how much more stylish can you get than the RMS (Royal Mail Ship) Queen Mary 2 of the Cunard line?

In 1839, Queen Victoria of England awarded Canadian-born Samuel Cunard the first ever license to deliver mail across the Atlantic, proudly granting his steamship the honored title RMS (Royal Mail Steamer). In 2004 RMS (Royal Mail Ship) Queen Mary 2 was awarded this privileged title and continues to celebrate this golden heritage that was started over 165 years ago. 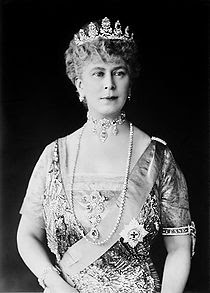 The Queen Mary 2 is named after the earlier Cunard liner Queen Mary, which was in turn named after Mary of Teck. With a full name of Victoria Mary Augusta Louise Olga Pauline Claudine Agnes, Queen Mary was the wife of George V, King of the United Kingdom and the British Dominions, Emperor of India who reigned over England from 1910 through World War I (1914–1918) until his death in 1936. He was the first British monarch of the House of Windsor.

Victoria Mary (known affectionately as May by her family) was born on May 26th, 1867 at Kensington Palace in London, daughter of Prince Francis, Duke of Teck, and Princess Mary Adelaide of Cambridge. By birth, she was a princess of Teck (a dukedom in southwestern Germany), in the Kingdom of Württemberg, with the title of Her Serene Highness. In December of 1891, May was engaged to her second cousin, once-removed, Prince Albert Victor, Duke of Clarence and Avondale, the eldest son of the Prince of Wales and next in line for the throne. The choice of May as bride for the Duke probably owed much to Queen Victoria's fondness for her, as well as to her strong character and sense of duty. However, Prince Albert Victor died six weeks after their engagement in the worldwide influenza pandemic which swept through Britain in the winter of 1891–1892.

Despite this setback, Queen Victoria still favored May as a suitable candidate to marry a future king; and Albert Victor's brother, Prince George, Duke of York and now second in line to the throne, evidently became close to her during their shared period of mourning for Prince Albert Victor. In May 1893, George duly proposed, May accepted, and they were soon deeply in love. May married Prince George, Duke of York, on July 6th, 1893 at the Chapel Royal, St. James' Palace, in London and went on to have a very successful marriage as well as six children: Edward, Albert, Mary, Henry, George, and John. 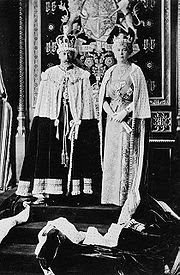 Before her husband's accession to King, Mary she was successively known as the Duchess of York, Duchess of Cornwall and Princess of Wales. Following the death of King Edward VII on May 6th, 1910, the Prince of Wales ascended the throne as George V, and May became his queen consort. Queen Mary was crowned with the King on June 22nd, 1911 at Westminster Abbey.

Following a long and successful reign as king, George V died on January 20th, 1936 from lung problems and at that time their eldest son, Edward, Prince of Wales, ascended the throne as Edward VIII. Mary was now officially Queen Mother, though she did not use that title and was instead known as Her Majesty Queen Mary. Within the year, Edward abdicated the throne to marry his twice-divorced American mistress, Wallis Simpson. Following the abdication, Prince Albert, Duke of York, Mary's second son, ascended the throne in Edward's place, taking the name George VI. When Mary attended the coronation she became the first dowager queen (widow of a deceased king) to do so in the history of England.

During World War II in 1942, her youngest surviving son, Prince George, Duke of Kent, was killed in an air crash while on active service and in 1952, King George VI died, the third of Queen Mary's children to predecease her (her youngest son, John, had died at the age of thirteen in 1918). Following the death of King George VI, Mary's eldest granddaughter, Princess Elizabeth, ascended the throne to become Queen of England. Queen Mary died the next year of lung cancer (referred to publicly as "gastric problems") at the age of 85, only ten weeks before Elizabeth II's coronation on February 6th, 1952, Queen Mary is buried beside her husband in the nave of St. George's Chapel in Windsor.

Anyhow, after that impromptu history lesson, it may be easy to see why I'd love to sail across the Atlantic on the Queen Mary 2 rather than just another ship that happens to be going that way! As a lover of history, I can think of no better way to travel as no doubt the story of the woman for which the ship is named could only add to the romance and excitement of the journey. Besides, I've already watched Fourth of July fireworks being shot off while on the deck the original Queen Mary - granted, she was docked in Long Beach, California as a floating hotel and museum and no longer sailed the seas but I was on board nonetheless!

Oh well, I guess I need to start saving my pennies if I ever hope for this particular daydream to become a reality! You gotta admit, it would make for a great blog post!
Posted by Linda at 7/02/2009