A Quick Trip to Massachusetts

After sitting at home for most of the day on my day off Thursday and debating what to do, I suddenly decided that a trip to Massachusetts to visit Lois, who is temporarily residing on the East Coast, was in order. I told the girls to pack a bag while I saw what I could negotiate on Priceline for a hotel in the Salisbury area. After a couple of clicks I had us booked into the Fairfield Marriot Inn in Amesbury at a pretty good savings (gotta love Priceline!) and we loaded up the car and headed north ... into traffic! 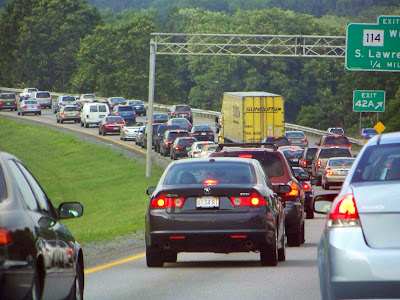 I had thought that getting through Worcester would be the worst of it but that part of the trip was a breeze compared to the traffic we ran into in Lowell, Lawrence, and other places that made no sense at all! I have come to the conclusion that there are way too many cars in the northeast and not enough highways to handle them. Sad thing is, almost every single car had but a single person in it. Sheesh! And people like to talk about the West Coast having commuter problems - ha!

Just a little over two hours later we got off the turnpike and had no problems finding our hotel where we checked in, checked out the room, and then headed down Route 1A to meet up with Lois and her hubby, Hank. Needless to say, Lois is even greater in person than she is on her blog (if that was even possible!) and I absolutely loved Hank - matter of fact, I found myself wondering on more than one occasion if he had a twin brother or a clone hidden away somewhere! Hank and Lois really are the perfect couple and it was a joy to meet them! Amanda and Jamie both thought they were a lot of fun, too.

As for Salisbury Beach itself ... it looks nothing like it did when I was last here way back in 1974 and it was actually purty skeery. We all agreed that it looked like the kind of place Stephen King would set a book in and scare the beejeebers out of people! I would have to say that Salisbury has definitely seen better days but I think we made the best of it and had a good time anyway.


Before heading south today and dropping Jamie off for the weekend at her cousins' house in Shirley, Massachusetts we'll be meeting up with Lois for lunch and another blog friend - Mags - will be coming up from Boston to join us. It should be a lot of fun no matter where we end up dining at - I'll let you know!
Posted by Linda at 7/17/2009