Even though I was raised as an Air Force brat and moved around from one part of the country to another as a kid, I have always considered Canterbury to be my hometown. Truth be told, I didn't spend a whole lot of time actually ever living in Canterbury but that matters not - it's still my hometown as far as I'm concerned and has been home to many of my relatives over the course of many, many years.

Today Canterbury is hosting "Old Home Day" - the town's version of a Fall Festival on the Canterbury Green. Apparently the tradition started back in the 50's and 60's and was restarted seven years ago by the Canterbury Historical Society, of which my cousin is the current Vice-President and other family members belong to - see? that whole history thing runs in the family! Said cousin calls it a “hodgepodge of all different things” and in looking over the Schedule of Events, I'd have to say she's right on the money with that one! A highlight of the event are tours of the old Green School - the one-room schoolhouse pictured above that was built in 1850. Not only did my beloved grandfather, of whom I've written several times in this blog, attend there but so did my mother and her siblings.

After the Dr. Helen Baldwin School was built in 1947 the school was still used for some kindergarten classes until the mid-1950's and then later housed the town's library until 2001 when new facilities were built. It was shortly after that, in 2002, that renovations began to revert the building to its roots as a one-room schoolhouse complete with old desks and a wood-burning stove. At one point, Canterbury had quite a few one-room schoolhouses but the Green School is the last one to be open to the public as all of the other ones passed on to other uses. The Canterbury Green where the event will be held is also the location of my former church - the First Congregational Church of Canterbury - which is going to look very familiar to regular readers of this blog as its picture has shown up here several times in the past! This current church is the second building to stand on the Green that I personally am aware of (apparently there were two others long, long ago but I'm pretty sure I wasn't around for either of them!) - the first one went up in flames back when I was a kid though I still have memories of swinging on the bell rope and attending my Aunt Nancy's wedding there. Vague memories but memories nonetheless of my own old home days!

I've not had the chance to attend an Old Home Day in quite awhile due to my work schedule but Amanda and I are going to wander north today and spend some time walking amongst the displays and demonstrations and maybe even sampling some of the pie and ice cream or candy apples and popcorn that will be on sale. My Uncle Al will be displaying some of his antiques while my Mom, Aunt Eleanor, and Aunt Nancy help out with tours at the Green School; later in the day at 2:30 my cousin Dave will be performing with his bluegrass duo, Bear Minimum, and no doubt my cousin Amy, the Historical Society Vice-President, will certainly be there selling copies of the 2010 Canterbury Historical Society Calender - in which rumor has it there are several of my pictures - as well as other items to help support their programs and projects.

In addition to all that, the Prudence Crandall Museum will be open free of charge for the day so perhaps I'll take Amanda over there to take a look around the former 1831 academy for girls of wealthy local merchants that was run by Prudence Crandall, a Quaker originally from Hope Valley, Rhode Island. That is, she ran the Canterbury Female Seminary for wealthy daughters until 1833 when she had the unmitigated nerve and gall to admit Sarah Harris, the 20-year old black daughter of a free African American farmer in the community who had aspirations to be a teacher to other African American girls. When the wealthy and prominent parents removed their daughters, Prudence temporarily closed her school and then re-opened her academy to "Young ladies and Misses of color" who came from as far away as Boston, Philadelphia, and New York City. 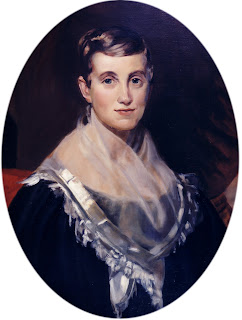 When she did that, Miss Crandall was faced with great local opposition as townspeople committed acts of violence against the school such as poisoning her well and other abuse. The State of Connecticut responded by passing what was called "The Black Law" in 1834 making it a crime for anyone to establish a school for the instruction of "colored people who are not inhabitants of this State," or to teach in any such school without the consent of local authorities. As the citizens of Canterbury certainly didn't give their permission this law made it illegal for Miss Crandall to continue to operate her academy and she was subsequently arrested, spent a night in the Brooklyn jail, and faced three charges in court.

The case was eventually dismissed in July of that year by the Supreme Court of Errors but two months later the "good" people of Canterbury formed an angry mob which attacked the school thereby effectively running Prudence out of town. Fearing for the safety of herself and her students, the school closed on September 10th, 1834. That same year Prudence married and moved to Illinois before eventually moving to Kansas where she continued to be an educator and an outspoken champion for equality of education and the rights of women until her death in 1890 at the age of 87. In 1838, Connecticut repealed the Black Law and in 1886, supported by Mark Twain and others, an annuity of $400 a year was granted to Prudence by the Connecticut Legislature which she received until she died.

Opened as a museum in 1984, the Prudence Crandall House was designated a National Historic Landmark in 1991 and in 1995 the Connecticut General Assembly designated Prudence Crandall as the state's official heroine due to her "lifetime achievements as an educator and champion of human rights as well as her courage and determination which serve as examples to all who face seemingly insurmountable odds and to those who refuse to be limited by social conventions. To this day, her efforts to promote equality in education remains unequaled." I guess it's the least we could do after the deplorable way she was treated. Seriously - shame on us and it's certainly a very poor chapter in Canterbury's history.

My apologies, I didn't mean to give you all a history lesson here - apparently I just can't help it, can I? Anyhow, if you're in the local area and don't have plans for this last Saturday of the summer, you can find Canterbury's Old Home Day on the Canterbury Green just south of the intersection of CT Routes 169 and 14 from 10 a.m. to 4 p.m.; admission is free and there promises to be lots for people to see and do. I'm sure it will be great fun even if you don't get to see sites like this one which I'm pretty sure doesn't appear in the 2010 Historical Society Calendar but is certainly part of my hometown's rural charm! Still you never know! ...