A Pilgrimage to Poe 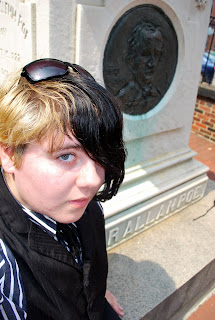 If you're an Edgar Allan Poe fan - as is Amanda and her friend Darci - there are certain pilgrimages in life that you just have to make even if it requires having your mom do the driving! Our trip to Baltimore last week was to accomplish one of those pilgrimages ... to view the final resting place of one of the world's most macabre writers who also happens to be one of Baltimore's most famous former citizens.

Edgar Allan Poe - author of such works as The Tell-Tale Heart, The Pit and The Pendulum, and - my personal favorite - The Raven - was born Edgar Poe on January 19th, 1909 in Boston. Following his parents death at a young age, he was taken in by John and Frances Allan of Richmond, Virginia and, though never formally adopted, took Allan as his middle name.

Following a term of enlistment in the Army, in 1829 Poe moved to Baltimore for a time to stay with his widowed aunt Maria Clemm, her daughter, Virginia Eliza Clemm (Poe's first cousin and his eventual wife), his brother Henry, and his invalid grandmother Elizabeth Cairnes Poe. While there Poe published his second book, Al Aaraaf, Tamerlane and Minor Poems.

Poe was the first well-known American to try to live by writing alone and he had a very hard time of it as publishers often refused to pay their writers or paid them much later than they promised. For all that he wrote some amazing poems and stories, the man - to put it simply - had a totally messed up life which included marrying his first cousin when she was only 13 and he was 24, major problems with alcohol and depression, the lose of his wife to tuberculosis in 1847, and spiraling out of control until he was found near death wandering the streets of Baltimore "in great distress, and... in need of immediate assistance" on October 3rd, 1849. Poe was taken to Washington College Hospital, where he died on Sunday, October 7th, 1849 never becoming coherent long enough to explain how he came to be in his dire condition and, strangely enough, wearing clothes that were not his own. To this day the actual cause of his death remains a mystery - something totally fitting for a writer such as Edgar Allan Poe. 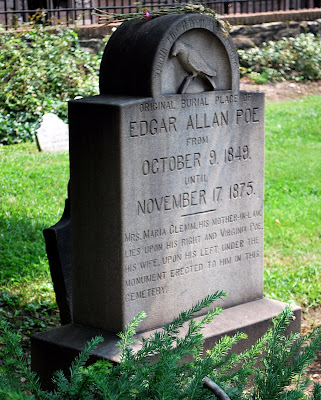 Following his death Poe was buried in an unmarked grave in the Westminster Burying Ground, one of Baltimore's oldest cemeteries which contains the tombs of many of early Maryland's most prominent political and military figures. Edgar Allan Poe's grandfather was one of those prominent citizens who had been a merchant and Quartermaster General in Washington's army and, originally, Poe's grave was near that of his grandfather in the family plot in the back of the cemetery but it had no marker and over the years became overgrown with weeds. Reports of Poe’s anonymous and unkempt grave began to circulate, first privately and then in the newspapers, so the citizens of Baltimore decided to do something about it. 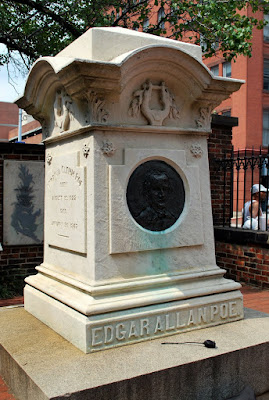 By 1865 a movement had begun, under the leadership of Miss Sara Sigourney Rice, to provide for a new monument to Baltimore’s neglected poet. The following appeared in the Baltimore Daily Commercial on October 9th, 1865:

This gifted but unfortunate genius, whose name will always be cherished by the lovers of true literature, died in this city sixteen years ago the present month, and was buried in a private grave-yard attached to the Westminster Presbyterian Church, corner of Fayette and Green Streets. No stone, not even a crude stake, marks the resting place of the author of the “Raven” and “The Bells.” The sexton alone knows the spot where sleep the remains of Edgar A. Poe.

It is always pleasant to chronicle suitable memorials to the illustrious dead, and we are, therefore, pleased to learn of an effort by an appreciative class of our community properly to honor the name of the poet. At a meeting of the Public School Teachers’ Association of Baltimore, held at the Western High School, on Saturday, 7th inst., a committee was appointed to arrange for the early erection of a becoming monument over the dust of one whose early history was intimately identified with this city, where not a few of his former associates and friends still live. The movement, we need not add, is an exceedingly commendable one, and has our best wishes for its complete success." 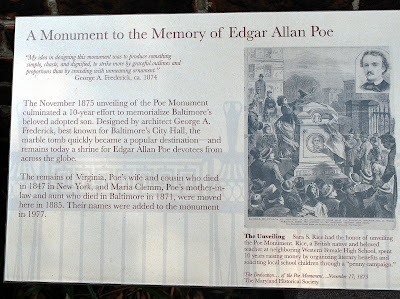 It took awhile but through a combination of pennies accumulated by students, gifts from friends, and a variety of benefits that were held, half of the necessary amount was raised by 1871; the remainder was donated by Mr. George W. Childs of Philadelphia in 1874. On November 17th, 1875 a new monument designed by George A. Frederick, who was also the architect for Baltimore’s City Hall, which had been placed in the front corner of the cemetery was dedicated. The remains of Virginia, Poe's wife who had died and was buried in 1847 in New York, were brought to Baltimore and added to those of Poe and his aunt Maria Clemm in 1885.

In 1913 another stone was placed on the site of Poe's original gravesite and emblazoned with a raven in honor of one of the world's most famous narrative poems that made Poe widely popular but didn't bring him much financial success.

Since 1949 on the night of the anniversary of Poe’s birth, a mysterious stranger has entered the cemetery and left as tribute a partial bottle of cognac and three roses on Poe’s grave. The identity of the stranger, referred to affectionately as the Poe Toaster, is unknown. It is thought that the three roses represent the three people whose remains sleep for eternity together under the monument but no one is quite sure why the cognac is left. Like a lot of Poe's life, it remains another mystery. 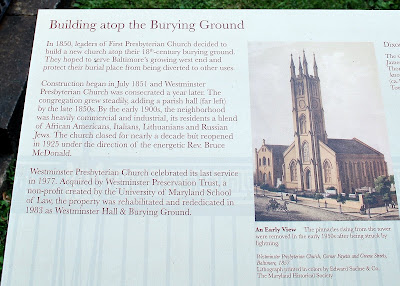 Westminster Hall and Burying Grounds is quite unique in that the church was built over the graveyard on arches so as not to disturb the tombs below it. The property was originally purchased in 1786 by a rather elite Presbyterian congregation whose members included a 'who's-who' list of Baltimore's earliest politicians, military, and business leaders. 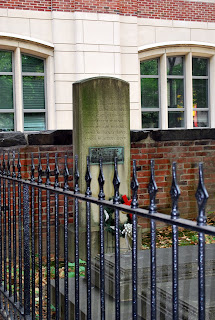 As hard as it is to believe, considering the fact that the graveyard doesn't look that big, there are over 1,000 people buried at Westminster including four early mayors and a good number of Generals from both the American Revolution and War of 1812 as well as over 200 other veterans. One of the more famous 'residents' is James McHenry, a signer of the Declaration of Independence, Secretary of War, and person for whom Fort McHenry in Baltimore is named.

Over sixty years later, a church was erected over the top of the graveyard on brick piers that straddled gravestones and burial vaults to create what later Baltimoreans referred to as the "catacombs." Completed in 1852, the church remained in active use until 1977 when care of the premises was assumed by the University of Maryland School of Law which owns the surrounding land. The burying grounds were cleaned up and the church was renovated for public use as Westminster Hall and remains under the auspices of the non-profit Westminster Preservation Trust who conduct tours of the grounds and building several times a month. Unfortunately, none of those times were while we were there. 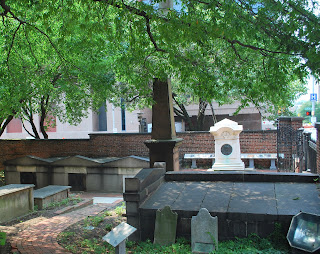 Now, as much as I like exploring old cemeteries, I certainly didn't drive all the way down to Baltimore to just walk through this one so after the girls paid their respects to one of their favorite authors and had their pictures taken in very places and poses amongst the gravestones, we found our way to our hotel. Prior to that we tried to find the former home of Mr. E. A. Poe but darned if we couldn't find it anywhere in spite of the fact we were in the right area and circled the neighborhood several times over. There were signs marking the way to get there but once you got there - there was nothing! Yet another Poe mystery I guess! 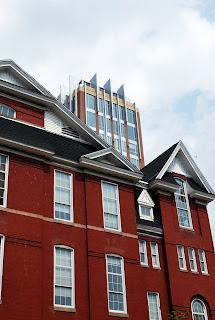 Driving through the narrow, hilly, and congested streets of Baltimore was not the most fun thing in the world but we managed to find our hotel without too much difficulty and were able to check in early. I had requested a room on a high floor facing northeast so that we might be able to have a nice view of the Inner Harbor, which was only four blocks away, so I was quite delighted to find out we had been given a room on the 37th floor - the highest floor in the hotel. We had a great view and the room was very nice in that it was a one-bedroom suite which meant I could go to bed at night, shut the door, and let the girls giggle to their heart's content! I would highly recommend The Tremont Plaza to anyone going to Baltimore! 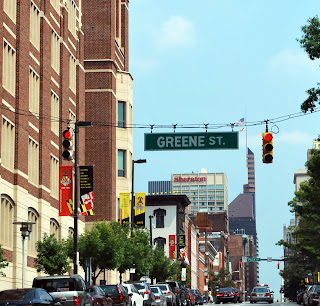 Following a brief respite, we walked down to the Inner Harbor to check out more of what Baltimore had to offer. There were a lot of other places I would liked to have seen in the city but once I had the car valet parked, I didn't want to really see it again until we left on Saturday as I had about had enough of Baltimore driving just getting over to Poe's Grave and such. I wasn't too sure about public transportation so we pretty much stuck to stuff within walking distance so that left out a lot of places that I probably would have found highly interesting while boring the girls to tears! 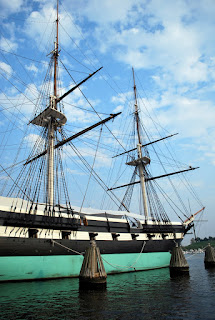 I thought the Inner Harbor area was very cool and would love to have gone over to check out Federal Hill and such on the other side but it was kind of hot and humid and the girls decided that the best place to go was the huge 2-story Barnes and Noble that they spied on the other side of the aquarium. While they perused books in the air-conditioning, I walked around and took a few pictures before taking a break at Starbucks and having myself a nice iced coffee and a cupcake while I listened to a local band playing in front of the building.

I did manage to talk the girls into walking over towards Fells Point with me but it's a bit of a haul and by the time we got there, Amanda's feet were starting to bother her and she really just wanted to go back to the hotel. Knowing that she was going to be doing a lot of walking in Washington DC the next day I decided it probably wasn't a good idea to push her much further so we caught a taxi and went back to our hotel for the night where the girls commenced their giggling and I hid in my bedroom with the door shut and the TV on while enjoying the comfort of my king-size bed!

The video of pictures that I put together for this part of our trip is set to music by the Alan Parsons Project from their debut 1976 album, Tales of Mystery and Imagination. Fittingly for this post, the name of the album is taken from the 1908 complete collection of Poe's works. Just as a small bit of rock history, the song I've chosen to use, The Raven, was the first rock song ever to feature a digital vocoder - or voice encoder if you will. I owned this album back in 1977 and just loved it even though it only rose to #38 on Billboard's Pop Album charts. I hope you enjoy the music as well as the pictures in the video - I tried to make it slow enough so you can read the captions!