I originally wrote this post on September 14th, 2006 but it seems to apply just as much this year as it did three years ago ...

With itchy eyes, a raw throat, constant sneezing, and a sinus headache just about every day I am having one heck of an allergy season this year. I'm definitely not alone as Amanda has been suffering from the same things as are a lot of other people at work. Whereas misery indeed loves company, what I really would like is to find something that works to relieve my symptoms!

It was predicted that we would have one particularly brutal allergy season and the predictions certainly weren't wrong. According to an ABC news report, Hartford is ranked number one this year in pollen and "Experts are calling this one of the worst allergy seasons on record, with people who never have had problems before reporting itching, coughing and sneezing."

I've always had Fall allergies with ragweed being at the top of my allergen list and I guess that all of the rain this year produced a bumper crop of ragweed that is now playing havoc on my system. I've been taking antihistamines and decongestants both to no avail and am seriously considering a move to Antarctica until things die down here! As much as I don't want to rush the cold weather, I've been hoping for a couple of nice killing frosts to do in the culprits that are floating freely in the air.

Oh well, relief is hopefully in sight soon as everything I've read says that ragweed usually only lasts until the middle of September and we're there now. That's definitely good news to myself and the other 75% of the population that is suffering right along with me! 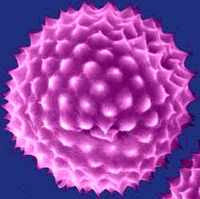 Look at the pretty ragweed pollen!