A Drive Through The Quiet Corner As mentioned previously, my cousin and I took a bit of a local road trip last Friday in search of foliage in the Quiet Corner of Connecticut. Sometimes when you're out traipsing around the rest of the countryside, it's all too easy to forget that there is beauty in one's own backyard - or in this case about 30 miles or so north of one's own backyard - and I was rather looking forward to exploring the back roads of the northeastern corner of the state in spite of the fact that it was somewhat overcast and darned cold for mid-October. On the bright side, though, it was my day off and it wasn't raining for a change! I asked my cousin to do the driving so that I could possibly take some pictures along the way and she graciously acquiesced so off we went in search of an apple orchard, some photo opportunities, and lunch! After plugging our destination in to the cousin's handy-dandy GPS unit, we drove up Route 169 to Route 44 and then over to Route 198 to Eastford and Buell's Orchard where I bought a nice bag of Cortland apples to make some pies, etc. I didn't really need that many apples and, as it was way too cold to even think about going out and picking our own, I didn't mind buying the pre-bagged ones in the least. A purist I'm not! From Buell's we made our way over to Route 171 and headed north towards Bigelow Hollow State Park, a place I had heard of but never been to. The picture above is Bigelow Pond not too far from the entrance of the park while the one below is Mashapaug Pond, located at the northern end of the park. The name 'Mashapaug' is Nipmuck Indian for "Great Pond" so it seems kind of redundant to me that it's called Mashapaug Pond as technically that makes it "Great Pond Pond"! 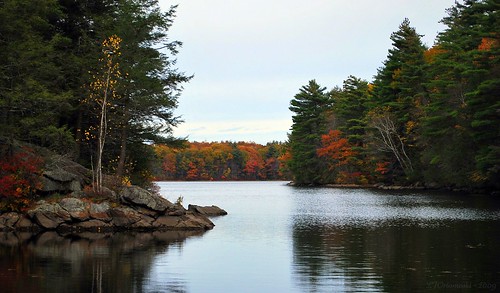 Not having a picnic lunch with us but definitely thinking it was well past time for some sustenance, we then headed up to Union - the smallest town in Connecticut - and the famous Traveler Restaurant (though truth be told, I had never heard of the place!). The thing that makes the Traveler unique is that in addition to a good meal, every diner at the Traveler can pick a free book from the many volumes that adorn the restaurant. Apparently the original owner came up with the idea back in 1984 as a way to thin out his own book collection and the current owners kept up the tradition.

According to the back of the menu, the Traveler gives away approximately 100,000 books a year - books that have been donated by libraries or picked up at auctions or flea markets or even perhaps left on the front step. In the basement of the restaurant you can find The Book Cellar with approximately 20,000 used books that are for sale. All in all, it was the ideal place for my cousin the librarian to have lunch! Funny thing is, neither of us left with a book! Following lunch and a look through The Book Cellar we hit the road again and headed back down Route 171 towards South Woodstock. Along the way we made a brief stop at the small Union Cemetery so that I could take a couple of pictures. After all, you know me and cemeteries! The sun had managed to peek through a couple of times during the course of our day as you can see from the blue sky above the cemetery but it wasn't quite able to stay out for too long. It was starting to get a bit overcast again as we turned from Route 171 onto Route 198 in Eastford and then cut across Old Colony Road to Schoolhouse Road where we stopped briefly to take the picture below. As I walked around trying to get the right angle and my cousin waited in the car, I was rather surprised when a gentleman in a pick-up truck slowed down to ask if we were okay and not having any car problems. I thought it was awful nice of him and it just goes to show that there is still kindness in strangers. It's sad that even living in a not-so-big city like Norwich I can get jaded to that fact.

We drove around a bit more through Pomfret and Woodstock - home to such celebrities as Brian Dennehy, Renée Zellweger, and Carrol Spinney (think Big Bird and Oscar the Grouch) - but it just seemed to be getting cloudier and colder so even though I would have loved to have seen more of The Quiet Corner we decided to call it a day around 4:00 and made our way back down Route 169 to Canterbury. Honestly, though, there were some truly beautiful areas that I would love to explore further but one of the places that I don't think I'll be getting to is the abandoned settlement of Bara-Hack which is located in the woods of Pomfret and reputed to be haunted.

Sometimes referred to as "the village of ghostly voices", people have reported hearing children laughing, dogs barking, mothers calling, wagons rumbling, and other unexplained noises. The story goes that the area was first settled by two Welsh families back in 1790 but was abandoned after the Civil War for one reason or another. All that remains now are just stone foundations, cellar holes, and a graveyard in the woods. Even the official website has disappeared as the land is privately owned and the owners don't want a bunch of wanna-be-ghosthunters trespassing out in their woods. I can't say that I blame them and I sure the heck wouldn't want to go out there at night but I bet there'd be some cool pictures during the day of the ruins and such. Too bad the owners no longer give permission for people to be there, I'd like it just for the history.

With that exception, though, don't be surprised if you end up reading more posts in the future from areas that aren't too far from my own backyard.
Posted by Linda at 10/27/2009