Hunting the Ghosts of Gettysburg

Following the completion of Edgar Allan Poe's funeral service (featured in the post below) on Sunday evening, the girls and I headed northwest to Pennsylvania and Gettysburg - one of my very favorite places in the country. I've been to Gettysburg several times in the past (the first time being back in the late 1970's when I was stationed at McGuire Air Force Base in New Jersey) and each and every time it has fascinated and awed me. There's really no good way to describe the feeling I have at the National Battlefield and the area surrounding it and I wanted to share that with Amanda and Darci in the hopes that perhaps they, too, would come to understand and appreciate some of the struggles our country has gone through to become the Nation that it is. I honestly don't believe that there is a more hallowed ground anywhere despite the fact that Gettysburg - sadly - is not anywhere near the only battlefield in this country. 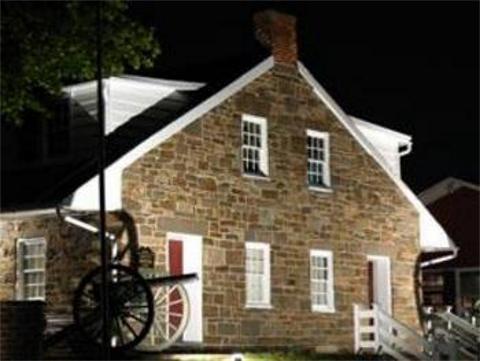 The last time I was at Gettysburg was with my cousin Amy back in May of 2002 and the time before that she and I had gone down with my son, Michael, shortly after he had graduated from high school. Initially Michael had that typical teenage are-you-kidding-me kind of attitude but that changed after we were there for awhile. Consequently this wasn't my first journey to Gettysburg with teenagers in tow and I was hoping that my previous experience would help out if they got to the are-you-kidding-me stage.

As Poe's funeral ended up running almost 2-1/2 hours, it was pitch black by the time we arrived in Gettysburg after 8:00 so consequently the girls had no idea what the countryside around us looked like. We drove through town and out to our hotel - the Quality Inn that is on the site of General Lee's former headquarters across from the Lutheran Theological Seminary - site of the first of the three days' fighting in Gettysburg.

I'd always wanted to stay there and it was a lovely hotel (probably the best one of our whole trip). After checking out the room and putting our stuff away, we drove to the Pizza Hut just down the road a bit and fortified ourselves with stuffed crust pizza before moving on to the rest of our agenda for the night - a ghost hunt with a blogging buddy of mine from Virginia! This is Patty and she writes the blog Autumn's Meadow as well as A Haunting We Will Go. I knew from reading her blog that Patty had planned to be in Gettysburg in October with her husband Dean and I was lucky that it turned out to be the same time that the girls and I were going to be there. Patty is an amateur ghost-hunter so I knew I'd finally be able to go on one of the many ghost tours that Gettysburg is famous for. There is no way on God's green earth that my cousin Amy would ever go on one with me when we were there but it was something I had always wanted to do. The girls were pretty excited about it, too, as the walk that we were going on was touted as an actual ghost hunt with actual ghost hunting equipment like night vision sensors, infrared viewers, thermal sensor digital recorders, EVP meters, and that sort of stuff. We weren't just going to walk around and be told scary stories - we were going in search of some ghosts!

After checking in at the Farnsworth House, one of the more famous spots for ghost tours in Gettysburg, we gathered out front with about 15 other people waiting for our guide, Gwen, to finish guzzling half a bottle of Coke before we headed out into the night. Apparently she'd had a long day and was in desperate need of caffeine which then gave her a desperate case of the giggles. The girls liked Gwen but I thought she was kind of a ditz and could have done a better job explaining to us how the equipment worked. Thankfully Patty and Dean had a pretty good idea of the technology involved so after being divided into groups, off we went in search of some of the supernatural. The area that we were taken to is known as The Grove, one of the most haunted areas on the battlefield which is located on the northernmost territory of Cemetery Ridge. Gwen gave us a brief run-down of what transpired during the fighting in the area on the second day of battle involving the Louisiana Fighting Tigers who had a reputation as being some of the fiercest, hardest-fighting, assault troops in General Lee's army. She pointed out what spots would be best for our hunt then plunked herself down on a rock to smoke cigarettes while we wandered around in the dark being careful not to trip over dark roots or any of the walnuts lying around!

While everyone else in our tour group headed out across the school fields towards a lake behind the trees underneath which bodies supposedly lie; Dean, Patty, Darci, Amanda, and I headed towards the woods at the foot of Cemetery Ridge. While everyone else tried out the high-tech equipment, I took a camera and just started snapping pictures in the dark to see if I captured any interesting orbs or the like. Generally speaking, you've got no idea what you may or may not have gotten in the picture until you get the chance to upload them to a computer. In the shot above, if you look carefully you can see a small orb in the left corner in a small patch of night sky. It looks solid enough to be an actual orb and not a bit of dust (which produces orbs that are generally translucent). Also, it was close to midnight and as it was pretty cold and damp, I don't think there was a whole lot of dust flying around out there. I could be wrong, of course!

In the pictures above, Amanda and Patty use some of the newer ghost-hunting equipment and Amanda and Darci also took turns using the dowsing rods - not a piece of new-fangled technology but the oldest form of divination known to man - to "talk" to any spirits that happened to be in the area. Darci had a pretty good "conversation" going on for awhile before we moved over to the area behind the bleachers where, during excavation to build them, several bodies were found. Eventually 59 bodies were recovered in the area but there were supposed to be 60 and no one knows what happened to the last one. Gwen had told us to pay particular attention to the 3rd, 4th, and 5th areas of the bleachers ... We never did get over to the lake where everyone else was still hunting around but in an area just east of the bleachers, Amanda got the following picture of what looks like some sort of mist forming right in front of her as well as an orb at the top. I should point out that Gwen had told us to take pictures in groups of three and in the other two shots that Amanda took of this same area, there wasn't even a smudge. This one you could see while it was still in the camera, too, so there was no waiting to get back to upload the pictures. I was walking right next to Amanda when she took this and I can vouch for the fact that there was nothing there at the time that I could see with my naked eye - no breath condensation, no one walking in front of her - nothing. In this picture, Dean and I were walking back across the field towards the rocks where Gwen was sitting and Amanda decided to snap a couple pictures. For some reason she really likes strange angles - well, either that or it was too dark for her to see where she had the camera pointed! I'm not sure whether Dean and I are walking through a field of dust or a group of orbs but either way I thought it was interesting and it looks like there might be one or two "legitimate" orbs floating around. I do remember feeling like "wow, it just got really cold" when we were walking back and a slight sense of unease so maybe this explains why.

Following our "hunt" we all gathered back together and walked back to the Farnsworth House were Gwen offered to come back out and talk to people after she had changed into her street clothes if they were so inclined. Both Amanda and Darci wanted to stay so even though it was way past midnight and getting chilly, we all hung around for a bit to chat.

As the girls sat on the steps, Patty and I sat in a couple of the chairs that were on the porch but as we were sitting there I just kept getting colder and colder and felt like there was a cold breeze blowing even though the night air was totally still. I asked Patty if she felt the same thing and she said she did while no one else who was gathered around Gwen (who was sitting cross-legged in the middle of the sidewalk with her pet ferret) felt all that cold or noticed any wind. Finally Patty and I got up and walked over closer to where everyone else was and I decided to turn around and snap a couple of pictures of the chairs that we were sitting in ... Patty had been in the white chair while I occupied the brown rocking chair next to her and what should be between the two chairs but a very solid orb? In the second picture, it's obviously not there. Hmmm ...

So, was our ghost-hunting adventure a success or a flop? If a success means that we got some 'strange' things on pictures, felt some 'strange' things, and even caught the occasional whiff of pipe tobacco and the like then I'd say that "yes, it was". Also, considering that both girls had a really good time and had to be dragged back to the hotel at 1:30 in the morning then yes, it was definitely a success!

I wish we'd had more time to spend with Patty and Dean but Monday was going to be a whirlwind tour of the battlefield for the girls and I before heading to Lancaster that evening to put Darci on a train to Philadelphia and Patty and Dean had plans of their own. However, I've told Patty that we definitely need to meet again and do some more exploring of the area - next time without an overly-caffeinated, bubblehead of a tour guide who spent more time giggling than anything else. The National Battlefield doesn't close until 10:00 at night so perhaps we can head out to the Valley of Death and a haunting we will go!
Posted by Linda at 10/19/2009