One week to the day later I am finally getting the chance to write about one of the main reasons that Amanda, Darci, and I made a second trip to Baltimore this year - the funeral of Edgar Allan Poe. The other reason can be found if you click here and go to my post from last Sunday but if you're a regular reader you're going to have done that already so please, continue on!

At any rate, I was going to start this post out with a bit of a poetic spoof -

Once upon a Baltimore sunny, while I thought I would be funny,
Over many a quip and snarky turn of phrase.
While I thought, and tried reciting, suddenly there came a growling,
As of someone almost scowling, scowling at my small word plays.
"'Tis some teenager," I muttered, "growling at my wit's new chore --
Only this and nothing more."

However, Amanda totally forbid me to do that which of course meant I had to do it anyway! She seems to think that Mr. Poe would be deeply offended but I'm pretty sure I'm not the first - nor the last - to totally muck up a classic like "The Raven". Besides, doing so gives me the chance to embarrass her once again which is part of the Parental Code of Conduct as spoken of last week!

Anyhow, enough fooling around and on to the topic at hand - the funeral that Edgar Allan Poe never got when he first departed this earthly plane on October 7th, 1849 under mysterious circumstances, or at least circumstances that have never been fully figured out. Baltimore has gone all out this past year celebrating the 200th birthday of the author who was born in Boston but died in their city and last week's funeral was probably the largest jewel in the crown that was Baltimore's Poe Bicentennial. It was an event more than worth the almost-6 hour journey and if E.A. Poe was able to attend, I'm sure he was pleased.

The day dawned absolutely beautiful and after getting our ducks in a row, the girls and I headed for downtown Baltimore bound and determined to find the allusive Poe House and Museum that we had failed to find several times over during our last trip to Baltimore.

Jeff Jerome, curator of the Poe House, left a comment on my previous post with better directions and landmarks plus I had also spoken to Gris Grimly's girlfriend about how tricky it was to find during his book signing the day before so I wasn't going to leave Baltimore without finding the house this time even though it wasn't going to be open to tour.

As you can see, we succeeded in locating the house and had our picture taken by another Poe-fan who was taking pictures of the house with her friend. Normally I'm behind the camera but in this case, I made an exception!

Following our moment of "Eureka! I've found it!", we walked around the area a little bit and watched the Loch Raven Pipes & Drums warming up as well as some adjustments being made to Poe's antique hearse. 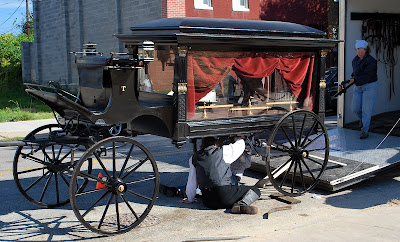 I still didn't know exactly which route the funeral procession was going to take to get to Westminster Hall so I took the opportunity to speak to a couple of Baltimore's Finest who were on duty for traffic control and the like. One advantage of being a former police dispatcher is that I always know who to ask for directions and have no fear of speaking to police officers. Sure enough, they were nice enough to whip out directions for the route and tell me where a good place to park was as well as the best place for viewing. The girls and I drove back over towards Westminster Hall, parking in almost the exact same spot as we did in August (déjà vu all over again!), before walking up to join the throng that was gathering in front of Poe's final resting place. A lot of the 'mourners' were decked out for the occasion in their period finest which made me wish once again that I had been born pre-Civil War so that I could hide my fat legs in the big skirts and hoops of the time (though I could have done without the itchy wool). Alas, I don't believe those particular fashions are due to come back anytime soon but fashionable or not, I would loved to have had one of the top hats that some of the women were wearing. Not that they woud go with my uniform mind you but the hats were just too cute!

Anyhow, in addition to the funeral attendees, some of the scheduled speakers were gathering also - Walt Whitman, Sir Arthur Conan Doyle, and others. One of the speakers, Revered Rufus Griswold, was probably not there to praise Edgar Allan Poe but to bury him (much like Marc Antony in Julius Caesar) as it was he who had tried and succeeded in ruining Poe's reputation.

An editor and literary critic, Griswold had borne a grudge against Poe since 1842 and attempted to destroy his enemy's reputation after his death starting with a long obituary that appeared in the New York Tribune the day after Poe died. In it he stated, "Edgar Allan Poe is dead. He died in Baltimore the day before yesterday. This announcement will startle many, but few will be grieved by it." Griswold also wrote a biographical article of Poe called "Memoir of the Author" in which he depicted Poe as a depraved, drunk, drug-addled madman and included Poe's letters as evidence. Griswold's book was denounced by those who knew Poe well and the letters later turned out to be falsified but a lot of people at the time believed his claims and half-lies. Needless to say, it was going to be quite interesting to hear what the Reverend Griswold had to say!

A short time later the sound of bagpipes and drums could be heard and soon Poe's funeral procession turned the corner onto West Fayette Street complete with a police escort and line of mourners behind the horse-drawn hearse. Amanda took some video which is included in the video below along with a lot of the other still shots I took during the funeral service. I should apologize now for the quality/clarity of some of those shots as they're shaky at best. Photography was allowed during the service after all but non-flash of course and though I had borrowed a zoom lens from Kevin, I'm not real good at holding the thing still apparently. I obviously need more practice but I didn't want to leave any of the speakers out so everyone's in there, even if they're a bit blurry.

Following the escort of Poe's "body" (it was a replica) into the church, the girls and I took a drive out to Fort McHenry so I could at least say I'd been there this trip and generally just killed some time until the girls could change into their funeral garb and head back to Westminster Hall. The service kicked off exactly at 4:30 with Poe's body being brought to the front of the church and the speakers gathering on the dais. Actor John Astin, probably best known for his role as Gomez on The Addams Family, opened the service as Master of Ceremonies followed by soloist Paula McCabe (the picture of her really was too bad to include).

From there one speaker after another, with the exception of Rufus Griswold, sung the praises of the Master of Macabre who had influenced their lives and writings in many different ways. Shortly after he began speaking, Griswold was hissed by the crowd and told to take his seat several times by Mr. Astin as he continued to spew the same venom that he did in 1850. I guess some people can really hold a grudge!

Two of my favorite speakers were H.P. Lovecraft, late of Providence, and Britain's Sir Alfred Hitchcock who opened his speech with his patented side profile presentation and "Good evening". Both spoke of how Edgar Poe had paved the way for them to become the writer and filmmaker that they were and Lovecraft even read a bit from his voluminous anthology Necronomicon while garnering quite a few chuckles from the audience, er, grieving attendees! 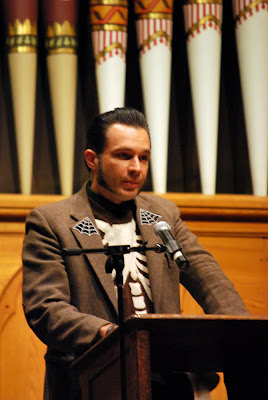 After a few more speakers Amanda's favorite illustrator, Gris Grimly, took the podium and it was easy to see that he wasn't kidding when he had mentioned the day before at his book-signing that he didn't like giving speeches to large crowds. He seemed a bit nervous and out of his element, especially compared to the relaxed guy we had met the day before, but he was quite funny as he talked about how reading and rereading and rereading Poe's works over and over and over again had changed his attitude when it comes to annoying people or being jilted by a girlfriend. I'm guessing he's got a dirt floor in his basement or perhaps a bricked-up wall or two! Hmm, perhaps I should read some more Poe and see what he might recommend for teenagers who don't put their dirty clothes in the hamper?!?

At the end of the service, the aforementioned Jeff Jerome thanked everyone for making Poe's funeral the wonderful event that it was and invited us all back again in 40 years to celebrate the 200th anniversary of Poe's death. Somehow I don't think I'm going to make it but I wouldn't be at all surprised if Amanda gets there - which would make her a bit older than I am now but probably still just as much of a Poe fan then as she is now.

All in all it was a great time and I'm really glad we went - if for no other reason than to see the looks on people's faces when I tell them I went to Baltimore to attend Poe's funeral! How many people can say that??